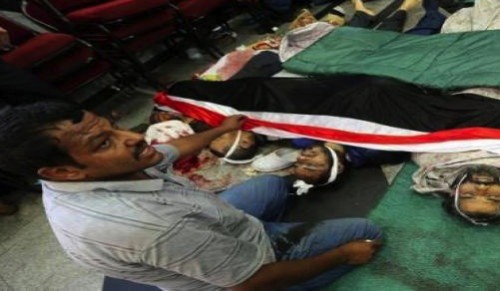 The political wing of the Muslim Brotherhood called for an “uprising” in the country after Egyptian security forces opened fire on supporters of the deposed president, Mohamed Mursi, killed least 42 people.

The Freedom and Justice Party, the religious group’s political arm, demanded “an uprising by the great people of Egypt against those trying to steal their revolution with tanks”.

The Muslim Brotherhood, which has led demonstrations against the overthrow of Islamist President Mohamed Mursi last Wednesday, said its supporters were “massacred” when police and troops fired on them during morning prayers outside in front of the Republican Guard headquarters in Cairo.

Over 1000 have been injured and more than 53 have been reported killed, according to the Muslim Brotherhood official website.

However, the Egyptian health ministry said at least 42 people had been killed and more than 300 injured in the incident early on Monday morning

The military blamed “terrorists groups”  and said they attempted to storm the Republican Guard headquarters.

Mursi is reportedly detained there after his arrest Wednesday.

The Monday morning violence further deepened a crisis in the country.

In a related development, Egypt’s prosecution ordered the closure of the Cairo headquarters of the Muslim Brotherhood’s Freedom and Justice Party after police found weapons inside it on Monday, a security official said, AFP reported.

However, the Freedom and Justice Party (FJP) affirmed that it had cleared its headquarters of all employees since June 27, 2013 in order to avoid bloodshed, after calls were made to burn those headquarters, which already resulted in the torching of many FJP headquarters since that date.