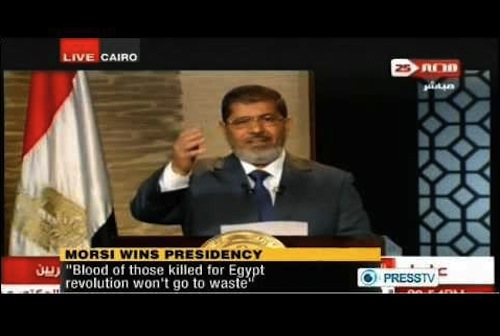 In one of the first real tests of the powers of the civilian president since the military “handover to civilian authority,” President Mohamed Morsy should pardon all those convicted by military courts, Human Rights Watch said. He should also order an immediate end to military trials of civilians and refer those against whom there is sound evidence of criminal activity to trial before civilian courts. On July 13, 2012, the committee that Morsy established to review cases of civilians sentenced by military courts recommended that the president pardon all of them.

According to the latest statistics given to committee members by the military, 2,165 civilians remain imprisoned after trials before military tribunals since January 28, 2011. In 2011, military courts tried over 12,000civilians, convicting at least 9,000, including hundreds of political activists, but most of the cases related to ordinary criminal activity. Military prosecutors have interrogated and detained at least 54 children from March 2011 to date, and have sentenced children with up to 15 years, Human Rights Watch research has found.

“International law is crystal clear on this – no civilian, regardless of the crime, should be tried by a military court. It doesn’t take a committee to confirm that,” said Sarah Leah Whitson, Middle East and North Africa director at Human Rights Watch. “President Morsy should take the principled human rights stance and pardon all civilians convicted by military tribunals.”

Military trials and arrests of civilians by the military have continued despite the June 30 “handover to civilian authority.” On July 12, plainclothes men arrested three political activists who are members of the Egyptian Social Democratic Party at a peaceful protest in Nasr City, outside the home of General Hamdy Badeen, the head of the military police, and military officers took them before a military prosecutor who ordered their detention for four days. As recently as July 9, a Suez military court sentenced eight protesters, one of them 16 years old, to prison terms ranging from six months to three years for using fireworks that could be considered explosives at a protest. The military has not yet ratified the verdicts. Morsy should order the military justice authority to quash the verdict and order a retrial before a civilian court, Human Rights Watch said.

Military courts are also trying 66 men and 16 women in connection with protests that later turned violent near the ministry of defense in Abbasiya in May. Human Rights Watch hasdocumentedthe military’s frequent arbitrary arrest of peaceful protesters during the dispersal of demonstrations. The committee will not have the mandate to look at these more recent cases because it will only look at convictions up until June 30, 2012.

In a July 11 press release, the committee said that the military justice system had informed them that there had been 11,879 civilians tried before military courts, 9,714 sentenced, and 2,165 who remained detained. The total number 11,879 does not appear to be accurate, because this was the same number the military publicized at the end of August 2011 and, since then, they have brought hundreds more civilians before military courts, Human Rights Watch said. Morsy should use his presidential powers under Article 56 of the Constitutional Declaration and Article 112 of the Code of Military Justice to issue a general pardon for all those convicted by military tribunals, Human Rights Watch said. A presidential pardon is the only way to overturn unfair trials by military courts.

Morsy established the committee to review military verdicts with Presidential Decree No. 5 of 2012. Its members will be the assistant public prosecutor; the district state security prosecutor; the assistant to the interior minister for public security; the deputy interior minister for prison authority; the assistant head of the military justice system; two civil society representatives – Ahmed Seif al-Islam Hamad, founder of the Hisham Mubarak Law Center, and Mohamed Zari’, head of the Human Rights Center for the Assistance of Prisoners – and two youth activists – Islam Lotfy, former member of the Revolutionary Youth Coalition, and Ali Mostafa.

The inclusion of long-term independent human rights and youth activists is a precedent worth noting, Human Rights Watch said. While the powers of the committee remain unclear, it can play an important role in obtaining and making public information about arbitrary detentions and unsound convictions.

The committee is tasked with reviewing “all cases of civilians sentenced by military tribunals since January 2011 until June 30, 2012 and producing a report on each of them with respect to the kind of crime they were convicted of and the sentence issued.” Its purview also includes “all administrative detainees held by the minister of interior or others” and “cases of revolutionaries sentenced by regular courts from January 2011 until June 30, 2012.” The decree grants the committee the right to visit places of detention and orders governmental authorities to cooperate with it.

Human Rights Watch strongly opposes any trials of civilians before military courts, where the proceedings do not satisfy the requirements of independence and impartiality of courts of law and are therefore inherently unfair. International human rights bodies over the last 15 years have determined that trials of civilians before military tribunals violate the due process guarantees in article 14 of the International Covenant on Civil and Political Rights (ICCPR), which affirms that everyone has the right to be tried by a competent, independent, and impartial tribunal.

Over the past year, Human Rights Watch has recommended that the Code of Military Justice be amended to limit military trials to military personnel and to state explicitly that the public prosecutor should investigate complaints regarding abuse of civilians by the military and to allow members of the military to be tried before civilian courts in cases of abuse and ill-treatment. Otherwise, Human Rights Watch said, there will never be full accountability for serious human rights abuses committed by the military over the past year, including torture, virginity tests, and the killing of protesters at Maspero.

Amendments to the 1966 Code of Military Justice approved on May 6 with the support of the major parties in parliament, the Muslim Brotherhood’s freedom and Justice Party and the Salafi Noor Party, limited the right of the president to refer civilians to military tribunals but retained the broad discretion for the military in Articles 5 and 7 to try civilians, as well as the right to try juveniles in Article 8 (bis).