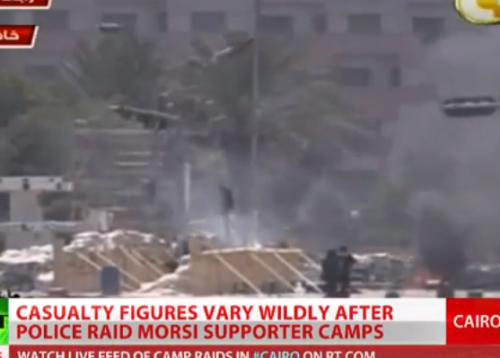 The latest updates on the death toll vary widely

A death tally by AFP says 124 were killed at the Rabaa Al-Adawiya sit-in alone while Aljazeera’s correspondent counted 94 bodies in Rabaa al-Adawiya’s makeshift hospital. The Health Ministry has put the figure at 15 people killed.

However, the Muslim Brotherhood said the death toll was as high as 2,200, with about 10,000 injured.

The EU has issued a statement urging all sides to exercise maximum restraint.

“Confrontation and violence are not the way forward,” said Peter Stano, spokesman for EU foreign affairs chief Catherine Ashton. “Reports about deaths and injuries in this respect are extremely worrying.”

Iran also condemned what it called a “massacre” as police moved on Wednesday to clear protests in Cairo by supporters of ousted president Mohamed Morsi, Fars news agency reported.

Qatar, a main backer of the pro-Morsi Muslim Brotherhood, issued a similar message.

“Qatar strongly denounces the means by which peaceful protesters in Rabaa al-Adawiya camp and Al-Nahda square have been dealt with and which led to the killing of several unarmed innocent people among them,” a foreign ministry spokesman said in a statement published on the official QNA agency.

There was no immediate reaction from the United States to Wednesday’s bloodshed.