Posted on: May 3rd, 2012 by Dr. Demetris Kamaras No Comments

Elections: Solutions do not come easy in Greece – analysis 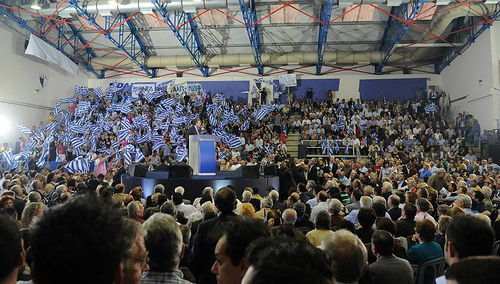 Both major political parties in Greece were not prepared to deal with the crisis; neither were their leaders. At the most crucial moment of their career, Samaras and Venizelos share some common characteristics: May 6 is going to be their first election as party leaders; both their predecessors resigned under pressure; both are pro-Memorandum; they are members of the elite and have both open trust issues with the party base.

This is clearly reflected in the campaigns of the two major parties that focused on branding techniques, putting the two politicians in the middle of their messaging systems. As specialists in both parties missed the opportunity to offset austerity measures by suggesting policies that could improve every daily life of citizens, so did campaign managers who decided to focus on ‘governmentability’ and ignore simple solutions that citizens could keep in their minds when they will approach the ballot box.

In this respect, current election campaigns seem to aim at the survival of the old, presenting parties engaged in a crisis-generated power game. They focus on party leaders, instead of issues and they still use old tools to deal with an unprecedented situation. What’s more, they continue to resist modernisation of party structure and culture.

Analysing the persuasion system adopted during the pre-election period, certain things are more than evident; for instance: bespoke solutions for citizens’ real problems remain absent from the campaigns of major parties; moreover, analysis of policies misses anecdotes and case studies, and has no reference to specific results.

Campaigns tend to focus more on the need for a mandate, instead of adopting honest and engaging approach. “Give me strength to change everything”, says ND leader Antonis Samaras, echoing the exact wording of George Papandreou in 2009. Furthermore, the mobilisation of voters is still attempted through open rallies, whereas populism and conspiracy theories thrived.

According to experienced pollsters, the situation three days before the elections has not changed as compared with the trends explored before the ban of the opinion polls. There are no differences in the election trends. There is a large figure of undecided voters, around 30%, of whom only a third feel they have to choose between the two major parties. The bulk majority is still looking for a small party to cast their votes; and this time, their options are many.

Strong government or non-governance? Pollsters agree that the two major parties have failed to push this dilemma to voters. ND and PASOK need at least 38% of the cumulative vote to secure 151 seats in Parliament. If they fail to reach this minimum, conventional thinking says a real political crisis could follow that might lead to the deconstruction of political parties, leadership change and a period of turmoil. Only one opinion poll company supports this scenario so far.

In a closed session today, an experienced pollster described the following scenario: New Democracy wins the election and Samaras is handed the mandate; when he asks Venizelos for PASOK party’s support to form a coalition, the Socialists veto the Samaras Premiership. Then the mandate changes hands and Venizelos asks ND for support, suggesting a third person from the centre-right field to lead the government. This person’s identity could raise some interesting speculation. All sorts of negotiations depend on the dynamics that will be formulated by the difference between ND and PASOK and the performance of the smaller parties.

Pollsters agree also that a third political force should emerge to support a coalition between ND and PASOK. As an analyst put it, “one of the most bizarre things in this election is the lack of cooperation between Drasi (Stephanos Manos) and Democratic Alliance (Dora Bakoyannis). If an agreement was reached, they would surely have entered Parliament and would constitute an effective arbitrator in a ND-PASOK government scheme, much better than the role LAOS played in the Papademos government.

On May 6, two distinct electorate bodies in terms of age will appear over the ballot box. 75% of people under 45 of age will vote elsewhere but the two major parties, next to 40% of the people over the age of 50 that are expected to do the same.

This attitude more or less connotes the future of major political parties in Greece. It is no different than that of the newspaper readers that grow old with their favorite newspapers and when they die, are not replaced, since the next generation is already online.

The 2-party system seems unable to survive May 6thwith dignity. Unless they decide to change the way they practice politics.