Posted on: July 6th, 2013 by Dimitris Ioannou No Comments 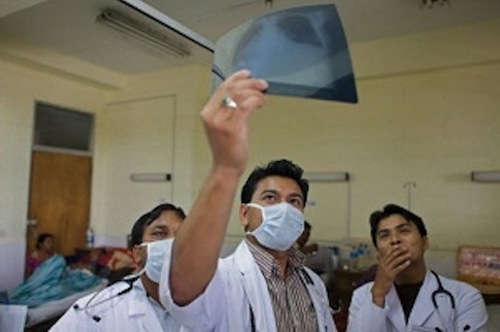 Coronaviruses are a large family of viruses that includes viruses that may cause a range of illnesses in humans, from the common cold to SARS. Viruses of this family also cause a number of animal diseases.

The Middle East respiratory syndrome coronavirus (MERS-CoV) has not been previously identified in humans. There is very limited information on transmission, severity and clinical impact with only a small number of cases reported thus far.

Since April 2012, there have been 64 laboratory-confirmed cases of human infection with Middle East respiratory syndrome coronavirus (MERS-CoV); 72% have been male. Thirty-eight of the confirmed cases have died. Affected countries in the Middle East include Jordan, Saudi Arabia, the United Arab Emirates (UAE), and Qatar. Cases have also been reported by four countries in Europe, France, Germany, the United Kingdom (UK) and Italy, and by one country in North Africa, Tunisia. All of the European and North African cases have had a direct or indirect connection to the Middle East. However, in France, the UK, Tunisia and Italy, there has been limited local transmission among close contacts who had not been to the Middle East.

Among the new laboratory-confirmed cases of MERS-CoV reported since the last update on 31 May 2013, three have been reported by Italy. In this cluster, the index case, a 45-year-old Italian resident, travelled to Amman, Jordan in mid-April. He developed mild respiratory symptoms one day before returning home to Italy in late May. He was admitted to hospital with pneumonia 3 days after returning home. Nasopharyngeal (NP) and throat swabs taken on the day following admission were positive for MERS-CoV. He had no underlying chronic medical conditions, but was noted to be obese. He recovered and was discharged home after a week in hospital. Contact monitoring was conducted in Italy, and two developed respiratory symptoms: a 42-year-old co-worker and a 14-month-old close relative. Both tested positive for MERS-CoV. The two contacts had each been exposed to the 45-year-old man on a single day, and their illnesses began 3 and 4 days, respectively, after that exposure. Both had mild illnesses and recovered uneventfully. Follow up was also done on close contacts in Amman, Jordan. Four symptomatic and six asymptomatic contacts had NP swabs collected for testing; all were negative for MERS-COV.

The Ministry of Health in Saudi Arabia has also notified WHO of additional laboratory-confirmed cases of MERS-CoV with onset in late May and early June. These include cases from the Ta’if Governorate, Wadi Al-Dawaser, and Hafar Al-Batin; the first reported from these areas. The more recent cases were similar in age and sex to previously reported cases, except for a 2-year-old with chronic pulmonary disease from Jeddah.

Although the exact timing and nature of exposures that result in infection is usually unknown, for those cases for which exposure is known or strongly suspected, the incubation period for laboratory confirmed cases of MERS-CoV is generally less than one week. However, in at least one case the known exposure occurred 9 to 12 days prior to onset of illness. Further evidence in cases exposed over a range of time suggests that, at least in a minority of cases, the incubation period may exceed one week but is less than two weeks.

Evidence is also accumulating to suggest that nasopharyngeal swabs are less sensitive for detecting infection with MERS-CoV than specimens taken from the lower respiratory track. Currently, no head-to-head comparisons are available on the two approaches to diagnosis. However, in a number of patients, NP swabs have been negative at one point during the course of illness while lower respiratory specimens were positive at another time during the same illness. In addition, in several clusters, patients who were strongly suspected of having MERS-CoV infection because of direct exposure and severe respiratory illness had NP swabs that tested negative, while other confirmed cases in the cluster had lower respiratory track specimens that tested positive.