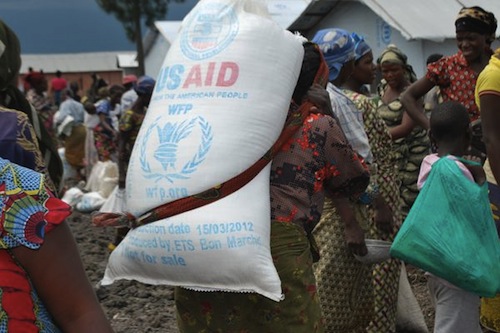 The United Nations food relief agency today announced it has launched a new emergency operation for the next nine months which aims to assist some 1.2 million people in the Democratic Republic of the Congo (DRC) who have been affected by ongoing violence.

“In most cases, people have left behind their homes, their fields and livestock, which are their sole source of food and income,” said the World Food Programme (WFP) Representative in DRC, Martin Ohlsen. “They are therefore – even if they just fled 20 kilometres away from their village – cut off from any sort of support for their families.”

An estimated 390,000 people have been internally displaced in eastern DRC and more than 60,000 Congolese have fled to neighbouring Rwanda and Uganda since fighting erupted in the North Kivu province in April between Government forces and the M23 rebel group.

The conflict is intensifying, WFP said in a news release, with militia groups fighting to extend their zones of influence. Human right violations, including murders, looting, rapes and abductions, have also led to massive population movement in the provinces of North Kivu, South Kivu, North Katanga, Maniema and Province Orientale.

The new operation, which will target these five provinces, will provide people with high energy biscuits, followed by emergency food rations or, in areas where markets are functioning, cash or vouchers that allow them to purchase their own food.

To fund the emergency operation, the agency has also launched an appeal for $81 million. However, Ohlsen said that so far only 15 per cent of the total cost had been mobilized.

As part of the operation, WFP is boosting the use of innovative tools to increase the efficiency of its emergency assistance such as the distribution of cash and vouchers, which has proved to be cost effective and has helped some 77,000 internally displaced persons (IDPs) in North Kivu. The programme will be expanded to other provinces over the next few months, and is planned to cover 188,000 people.

Between January and August, WFP provided food assistance to about 730,000 people displaced in eastern DRC, living in camps, informal settlements or with host families.

In addition to emergency response operations, WFP said it will continue to provide support to the Congolese who face day-to-day struggles such as chronic food insecurity, malnutrition in children and pregnant or nursing women, and a high incidence of HIV and tuberculosis. An additional $84.6 million is required to continue to address these issues in the country, the agency said.

“It’s important not to forget that this crisis in the East is taking place in one of the poorest countries in the world, where 5.4 million people were already facing chronic hunger and malnutrition,” Ohlsen added.