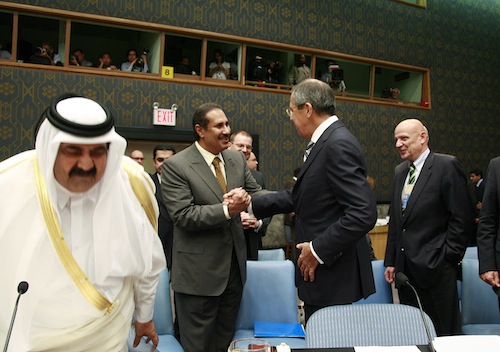 The Emir of Qatar, Sheikh Hamad bin Khalifa al-Thani, is due to hold meetings with members of the royal family Monday, amid reports of power handover to his son, Crown Prince Sheikh Tamim bin Hamad al-Thani.

The sheikh “will meet Monday with the royal family and advisors,” the Qatar-owned Al Jazeera television news channel reported Sunday,

The news channel said it had learned of the news from “trusted sources”, but provided no further details.

“The planned meeting comes amid news about the intentions of the emir to transfer power to his heir apparent, Sheikh Tamim bin Hamad al-Thani,” said the Qatar-based news channel.

Sheikh Hamad came to power in a coup when he overthrew his own father Sheikh Khalifa in June 1995 while he was in Geneva, Switzerland.

He will either hand over power  to Sheikh Tamim or appoint him prime minister in the place of powerful premier Sheikh Hamad bin Jassem bin Jabr al-Thani, according to AFP.

Qatar took part in the armed intervention in Libya and is actively supporting rebel forces in Syria.