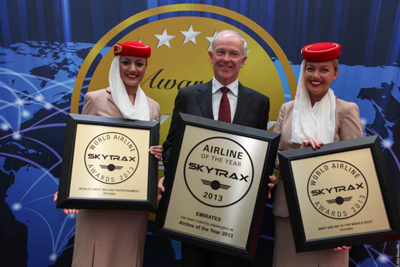 Cementing its place as one of the world’s leading international airlines, Emirates has been awarded the highly coveted ‘World’s Best Airline’ award, presented by Skytrax at the 2013 World Airline Awards.

In addition to winning ‘World’s Best Airline’ Emirates scooped up a further two awards including; ‘Best Middle East Airline’ and for a record ninth year in a row, ‘World’s Best Inflight Entertainment’. The awards were collected today by Tim Clark, President Emirates Airline at the Paris Airshow. The Skytrax World Airline Awards polled over 18 million business and leisure air travellers from more than 160 countries

“Being honoured with these awards is testament to our unrelenting effort to be the world’s best airline,” said Mr. Clark. “We are constantly striving to offer our customers consistent, world-class service that extends from the moment they make their booking to the moment they arrive home at the end of their journey.”

“These awards are widely regarded as the industry’s benchmark for excellence. For us, the awards clearly reflect a vote of confidence from global travellers, who acknowledge and appreciate our continuous drive to deliver high-quality service. To be voted ‘World’s Best Airline’ by millions of discerning travellers really is something for our 60,000 strong workforce to be proud of,” added Mr. Clark.

Since launching in 1985, Emirates has grown into one of the largest and most dynamic airlines in the world and has transformed Dubai into a major connecting hub for global air travel.

Last year over 39 million customers flew with Emirates, connecting across the airline’s global network and enjoying the airline’s extensive onboard innovations, including the industry leading inflight entertainment system ice, offering over 1,400 channels of entertainment.

Emirates has been, and continues to be, a leader in revolutionising air travel, working closely with manufacturers and suppliers to ensure all aspects of the customer experience are second to none. It is the many advances by Emirates in the area of aviation that have resulted in the airline winning more than 500 international awards.