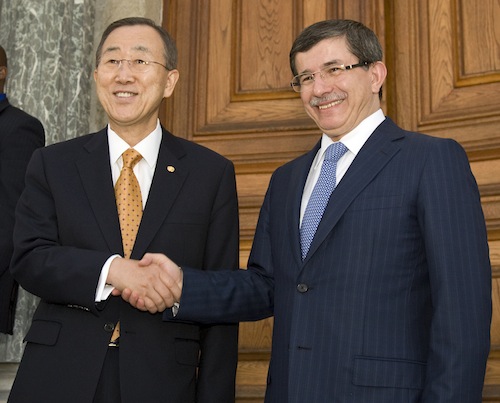 Turkish Prime Minister Recep Tayyip Erdoğan announced on Saturday that he will visit Gaza, following Israel’s apology from Turkey over the Mavi Marmara killings, made the previous day.

“It may eventually visit Gaza and the West Bank in April,” state news agency Anatolia quoted Erdogan as saying.

Taher al-Nunu, spokesman for Ismael Haniyeh, the head of the Hamas government in the Gaza, confirmed that “Recep Tayyip Erdogan will soon visit the Gaza Strip where he will meet with Prime Minister (Haniyeh)”.

Meanwhile Foreign Minister Davutoglu said in a statement that tough negotiations were conducted in the last 3 years concerning Turkey’s demands from Israel with a view to normalization of relations and in the end Turkey’s demands were met.

Pointing that the content of the phone call between Prime Minister Erdoğan and Israeli Prime Minister was agreed in advance, Foreign Minister Davutoglu mentioned that negotiations were held through U.S. officials.

Prior to the phone call between the Prime Ministers, officials of Al Fatah, Hamas, Egypt and Qatar were contacted, added Foreign Minister Davutoglu.

Recalling that Israel did not object the compensation but opposed the demand for apology from the very beginning Foreign Minister Davutoglu explained that there would be negotiations concerning the compensation to the victims’ families in respect of international law.

Foreign Minister Davutoglu said that the easing of embargo on Gaza started and stressed that Turkey would closely monitor the practice concerning the embargo.

Foreign Minister Davutoglu pointing the timing of the recent development said that this step would strengthen the position of Palestine and would crystallize Turkey’s role in the Middle East Peace Process.