Escalating use of religious rhetoric could exacerbate Syrian conflict 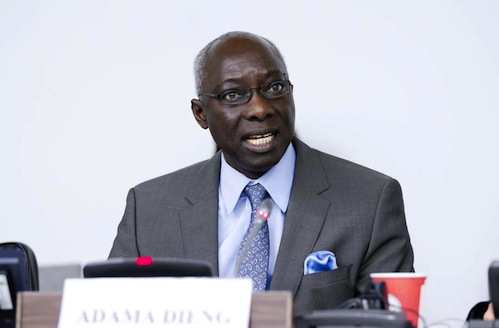 The increasing use of rhetoric by political and religious leaders in the context of the Syrian crisis could exacerbate the violence in the Middle Eastern country and fuel tensions between different groups in the region, the United Nations Special Adviser on the Prevention of Genocide warned.

“History has shown that exploiting religious tensions in the context of a political and armed struggle may incite violence and could lead to large-scale atrocities,” said Adama Dieng, expressing concern over recent statements by some religious leaders who have portrayed the Syrian conflict as a religious one.

“Such rhetoric, when it constitutes incitement to violence on religious grounds, could exacerbate the already disastrous violence in Syria, lead to further war crimes and crimes against humanity and fuel tensions between different groups both in Syria and elsewhere in the region.”

More than 93,000 people have been killed and over 1.7 million people have fled Syria to neighbouring countries since fighting began in March 2011 between the Syrian Government and opposition groups seeking to oust President Bashar Al-Assad.

Dieng stressed that all leaders have the responsibility of speaking out against any hate speech that encourages intolerance and discriminatory stereotyping, or that constitutes incitement to violence.

“I urge all leaders in the wider region to act responsibly and refrain from using or condoning any language that may escalate sectarian tensions. The consequences of rhetoric that inflames these tensions will be felt by populations across the region,” he said.

Under international law, attacks against civilians cannot be justified under any circumstances and advocacy of hatred that constitutes incitement to discrimination, hostility or violence is also prohibited, Mr. Dieng noted.

“All States must refrain from contributing to such crimes, including by tolerating hate speech and incitement to violence against particular populations,” he said. “If we do not act now, there is a serious risk that sectarian violence could spread across the region.”

The Office of the Secretary-General’s Special Adviser on the Prevention of Genocide was set up in 2004 in recognition of the international community’s collective failure to prevent or stop past genocides. It is tasked by the Security Council with collecting and assessing information on situations that might lead to genocide.