Posted on: December 21st, 2012 by Romana Turina No Comments 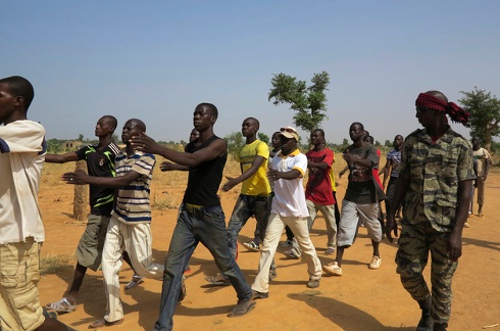 “Mali’s new prime minister needs to tackle an array of human rights problems, but an abusive military and rising ethnic tensions in the country should top the list,” said Corinne Dufka, senior West Africa researcher at Human Rights Watch. “If not addressed, these abuses will seriously interfere with organizing national elections and worsen conditions in the north.”

Pro-government militias and ethnically allied youth groups have prepared lists of people in the north who would be targeted for reprisal once the government forces retake control. People who helped prepare the lists informed Human Rights Watch that those listed include combatants and supporters from factions that participated in the conquest of the north.

The human rights situation in Mali has drastically deteriorated in 2012 following a separatist Tuareg rebellion and Islamist occupation in the north, and political upheaval generated by a March military coup. Human Rights Watch research in Mali since April found that security forces loyal to coup leader Capt. Amadou Sanogohave been implicated in numerous serious abuses including torture, enforced disappearance, and the intimidation of opposition voices. Outside the capital, the Malian army has arbitrarily detained and executed mostly Tuareg and Arab men for their alleged connections to rebel groups in the north.

People from various ethnic groups also told Human Rights Watch that they were concerned that ethnic tensions were being fueled by the political manipulation of ethnicity by some political and military leaders. They feared that if the tensions remained not acted upon, it could result in incidents of deadly collective punishment and ethnic violence.

On October 12, the United Nations Security Council adopted Resolution No. 2071 in response to Mali’s request for an international military force to recover control over the north. Many northern residents and militiamen who spoke to Human Rights Watch expressed concern that such an intervention might be a catalyst for acts of collective punishment, particularly against the Tuareg. One said, “The danger will come from the moment the intervention kicks off.”

To address long-standing patterns of impunity in Mali, the government should establish a national independent Commission of Inquiry into the abuses during past rebellions with a view to making recommendations on accountability, and a truth-telling mechanism to explore the dynamics that gave rise to Mali’s multi-faceted crisis, and make recommendations aimed at ensuring better governance and preventing a repetition of past violations. Any future negotiated settlement among the warring factions should reject an amnesty for those responsible for serious crimes in violation of international law.

“The coup in Mali has ushered in a period that entrenches the power of the gun over the rule of law,” Dufka said. “The new prime minister should act promptly to reverse this situation and place human rights protections at the top of his agenda.”

Tuareg civilians told Human Rights Watch they feared reprisals, primarily from several pro-government militias, whose few thousand members are largely Songhai and Peuhl. Since June these militias have concentrated in several camps in and around the town of Sévaré, 623 kilometers from Bamako. Sévaré lies just south of the informal division between the Islamist-controlled north and government-controlled south. The largest of these militias, the Ganda-Koi and Ganda-Izo, have received training and some logistical support from the Malian army, but have not been armed or given a formal security role, according to militia members.

Numerous militia members told Human Rights Watch that these militias, as well as youth groups made up of members of northern ethnic groups – the Songhai, Peuhl, Bozo, and Bella – had apparent plans to “settle scores” with their perceived northern opponents.

“Collaborators” who provided intelligence, participated in the recruitment of local boys and men into the armed groups, and served as community liaisons would also be targeted, as would local businessmen who had profited financially from their association with northern armed factions.

One militiaman told Human Rights Watch: “Some on the list are obvious because they took up arms and looted everything we worked for, or have been walking around beating people for smoking or not covering their heads. Others have collaborated – cooking, encouraging our children to join up. Do they think we don’t know who they are?”

Another militiaman said: “We know who is who. We know who showed the MNLA and MUJAO where we hid our cars, motorcycles and computers. We know who stole our generators, painted them and put them to use in their houses. We know who raped our women.”

A youth from Niafounké in Timbuktu who had contributed names to the list said: “We watched them [fighters] as they loaded up our stuff and onto trucks toward Mauritania – not just from us personally but from the hospital… They took millions of CFA [African Financial Community francs] in medicines, moto bikes and the ambulance. For those who betrayed the nation, there willbe a settling of scores.”

Many of those interviewed feared that collective punishment could be meted out against the Tuareg population in the future. “We’ve had to leave our villages, our women have been raped, and they [the MNLA and Islamist groups] stole all we worked for,” one militia member said. “This rage will lead them [past victims] to kill people – innocent people. It is very dangerous.”

Political leaders of the Ganda-Koi and Ganda-Izo militias interviewed by Human Rights Watch appeared genuinely concerned about the potential for collective punishment. They described efforts including informal training of the militia leaders to avoid it.

“We’re trying to teach them to respect life, to abide by the Geneva Conventions, but when one is on the ground we fear the boys will forget all that, especially if there are no courts to hand the accused over to,” one told Human Rights Watch.

MNLA fighters and elders cited the lack of justice for war crimes, including several massacres committed by the Malian army and allied Ganda-Koi militia against Tuareg villages during past rebellions since the 1960s, as being one of the motivations for again taking up arms earlier this year. Likewise, Songhai and Peuhl elders have noted the lack of justice for crimes committed during the MNLA and Islamist occupation of the north this year as providing fuel for potential violence by members of their communities.

A mid-level Songhai militia commander told Human Rights Watch, “For our communities to be able to live together again, those who raped, pillaged and destroyed our lives simply must be judged…only then can we repair relations.” A Tuareg elder similarly noted, “The Ministry of Justice should assure us these crimes will be dealt with. The state must put the ethnic tension on their agenda. They should bring leaders of all groups together in a truth-telling like experience [such as a Truth and Reconciliation Commission].Even if the militias have a list, it can be used to bring them before a TRC!”