Posted on: November 27th, 2012 by AlYunaniya Staff No Comments 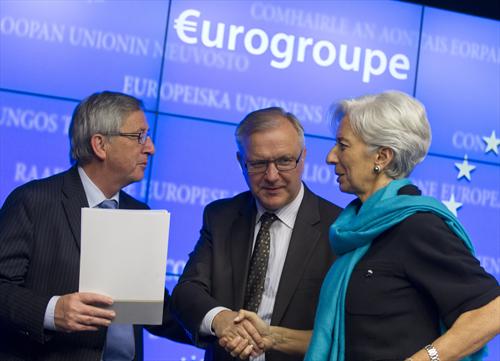 Eurozone and the IMF reached a tentative agreement that should see the release of up to EUR 44 billion in bailout funds needed to rescue Athens from insolvency, media report from Brussels.

“The Eurogroup recalls that a full staff-level agreement has been reached between Greece and the Troika on updated programme conditionality and that, according to the Troika, Greece has implemented all agreed prior actions.

The Eurogroup in particular welcomes the updated assessment of the Troika that Greece has implemented in a satisfactory manner a wide ranging set of reforms, as well as the budget for 2013 and an ambitious medium term fiscal strategy 2013-16.

The Eurogroup noted with satisfaction that the updated programme conditionality includes the adoption by Greece of new instruments to enhance the implementation of the programme, notably by means of correction mechanisms to safeguard the achievement of both fiscal and privatisation targets, and by stronger budgeting and monitoring rules. Greece has also significantly strengthened the segregated account for debt servicing. Greece will transfer all privatizations revenues, the targeted primary surpluses as well as 30% of the excess primary surplus to this account, to meet debt service payment on a quarterly forward-looking basis. Greece will also increase transparency and provide full ex ante and ex post information to the EFSF/ESM on transactions on the segregated account.

The Eurogroup again commended the authorities for their demonstrated strong commitment to the adjustment programme and reiterated its appreciation for the efforts made by the Greek citizens.

The Eurogroup noted that the outlook for the sustainability of Greek government debt has worsened compared to March 2012 when the second programme was concluded, mainly on account of a deteriorated macro-economic situation and delays in programme implementation

The Eurogroup considered that the necessary revision in the fiscal targets and the implied postponement of a primary surplus target of 4.5% of GDP from 2014 to 2016 calls for a broader concept of debt sustainability encompassing lower debt levels in the medium term, smoothing of the current financing hump after 2020 and easing of its financing.

The Eurogroup was informed that Greece is considering certain debt reduction measures in the near future, which may involve public debt tender purchases of the various categories of sovereign obligations. If this is the route chosen, any tender or exchange prices are expected to be no higher than those at the close on Friday, 23 November 2012.

The Eurogroup considers that, in recapitalising Greek banks, liability management exercises should be conducted in respect of remaining subordinated debt holders so as to ensure a fair burden sharing.

Against this background and after having been reassured of the authorities’ resolve to carry the fiscal and structural reform momentum forward and with a positive outcome of the possible debt buy-back operation, the euro area Member States would be prepared to consider the following initiatives:

- A lowering by 10 bps of the guarantee fee costs paid by Greece on the EFSF loans.

- An extension of the maturities of the bilateral and EFSF loans by 15 years and a deferral of interest payments of Greece on EFSF loans by 10 years. These measures will not affect the creditworthiness of EFSF, which is fully backed by the guarantees from Member States.

- A commitment by Member States to pass on to Greece’s segregated account, an amount equivalent to the income on the SMP portfolio accruing to their national central bank as from budget year 2013. Member States under a full financial assistance programme are not required to participate in this scheme for the period in which they receive themselves financial assistance.

The Eurogroup stresses, however, that the above-mentioned benefits of initiatives by euro area Member States would accrue to Greece in a phased manner and conditional upon a strong implementation by the country of the agreed reform measures in the programme period as well as in the post-programme surveillance period.

The Eurogroup is confident that, jointly, the above-mentioned initiatives by Greece and the other euro area Member States would bring Greece’s public debt back on a sustainable path throughout this and the next decade and will facilitate a gradual return to market financing. Euro area Member States will consider further measures and assistance, including inter alia lower co-financing in structural funds and/or further interest rate reduction of the Greek Loan Facility, if necessary, for achieving a further credible and sustainable reduction of Greek debt-to-GDP ratio, when Greece reaches an annual primary surplus, as envisaged in the current MoU, conditional on full implementation of all conditions contained in the programme, in order to ensure that by the end of the IMF programme in 2016, Greece can reach a debt-to-GDP ratio in that year of 175% and in 2020 of 124% of GDP, and in 2022 a debt-to-GDP ratio substantially lower than 110%.

As was stated by the Eurogroup on 21 February 2012, we are committed to providing adequate support to Greece during the life of the programme and beyond until it has regained market access, provided that Greece fully complies with the requirements and objectives of the adjustment programme.

The Eurogroup concludes that the necessary elements are now in place for Member States to launch the relevant national procedures required for the approval of the next EFSF disbursement, which amounts to EUR 43.7 bn. EUR 10.6 bn for budgetary financing and EUR 23.8 bn in EFSF bonds earmarked for bank recapitalisation will be paid out in December. The disbursement of the remaining amount will be made in three sub-tranches during the first quarter of 2013, linked to the implementation of the MoU milestones (including the implementation of the agreed tax reform by January) to be agreed by the Troika.

The Eurogroup expects to be in a position to formally decide on the disbursement by 13 December, subject to the completion of these national procedures and following a review of the outcome of a possible debt buy-back operation by Greece.”