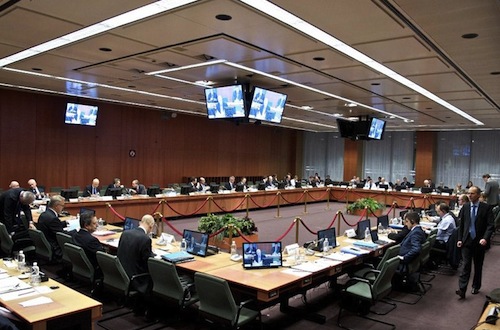 “The reshuffle will take place after the disbursement of the tranche,” a government source told journalists. “The finance minister will not be moved.”

The governmental coordination committee, protothema.gr writes, came after DIMAR’s proposal and will be set up after the summit. It will have the following responsibilities: a) monitoring the implementation of decisions of political leaders; b) solving intergovernmental and interministerial problems; c) informing parties about governmental decisions.

Meanwhile, Eurozone finance ministers meet today to give a tentative go-ahead for the disbursement of EUR 44 billion in emergency loans to Greece, as European Union and International Monetary Fund (IMF) lenders disagree over how to resolve the country’s debt crisis.

According to a Reuters report, the money will only be paid on Dec. 5 if the country meets all remaining conditions.

According to the report, providing Eurozone finance ministers have given their political endorsement, proposals on how to cut Greek debt and provide additional financing can be sent to national parliaments for approval, a step that is expected to be completed by Nov. 30, according to media reports. Then, the troika will check if the remaining reforms are in place on Nov. 28 and Eurozone finance ministers will make the final decision to pay the next tranche to Athens on Dec. 3, Greece and the European Commission would sign a revised memorandum of understanding on Dec. 4 and Greece would get the money on Dec 5.

Sources close to Prime Minister Antonis Samaras said they expected a tranche of EUR 31.5 billion in aid by December 5 and another EUR 13 billion in January, Kathimerini writes.