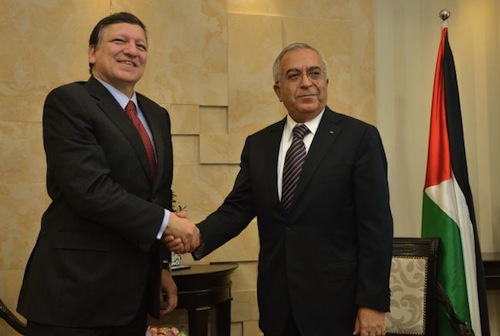 “…My message to the Prime Minister and to Palestinians is clear: we have stood by you in this journey and we will continue to do so. In fact the European Union stands as the largest donor to the Palestinian people, including through UNRWA. From 2000 to the end of 2011, the EU has committed nearly EUR 4 billion in assistance through various instruments. So, our commitment is clear… The truth is that through our overall political and financial support we are laying the foundations of a future democratic and viable Palestinian state – its institutions and its infrastructure. And through this we are contributing to a two-state solution. That has and will continue to be our goal: two states living side-by-side in peace and security.

The resolution of the Arab-Israeli conflict remains a strategic priority for the EU. We will continue with our efforts, within the Quartet, to facilitate contacts between the parties and to resume substantive talks. In this context, it is important that both sides support confidence-building measures to re-launch the peace process.

Lately, international attention has been focused on other countries in the region. However the momentous change that we are witnessing throughout the Arab World should constitute an incitement and not a deterrent to the resumption of negotiations. The Middle East Peace Process cannot become an orphan of the Arab Spring.

Meanwhile it is important that the two parties do not act in a way that undermines the viability of a two-state solution. In this respect it is with concern that we see the continuous growth of settlements in the West Bank, including East Jerusalem.

I also welcomed signs of more concrete progress on Palestinian reconciliation. This is a key factor contributing to the unity of a future Palestinian State and to reaching the two-state solution.

In addition, the prospect of elections, which the Prime Minister has supported, would be a significant contribution to Palestinian state-building. It is important that all Palestinian actors take advantage of the positive developments towards democratisation in the region to build a future of democracy, security and prosperity.

I am fully aware of the magnitude of the challenges that the Prime Minister and the Palestinian people still face. But as I said before: we stand by you…”