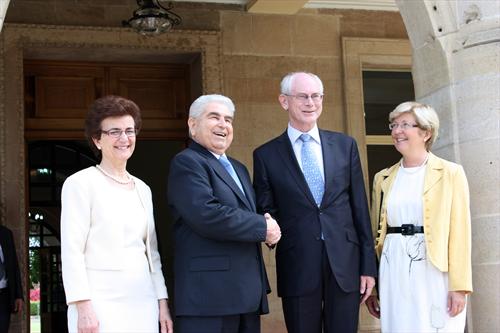 During his visit, Van Rompuy addressed the Parliament of Cyprus yesterday. He, inter alia said:

“President Christofias and myself have had a very fruitful meeting today. A working meeting. We discussed two main topics: the outlook for the Cypriot Presidency, and the preparations of the June European Council. Let me say a few words about the key points of our discussion.

A few days ago, on the 23rd May, President Christofias, other European leaders, as well as myself have reached a common understanding on how to boost growth and jobs in Europe.

The discussion about growth is not new. We already share a growth strategy and it has been a constant concern. However, our ongoing work on growth has been overshadowed by our vital efforts to ensure financial stability in the Eurozone. But it is no less important.

And there should be no misunderstanding: it is obvious that opposing “deficit reduction” and “growth” is a false debate. They are two sides of the same coin. Without sound public finances there can be no sustainable growth; but without sustainable growth, the measures to bring our debt levels under control do not attain their full impact.

In the short term we all agreed that we should structure our work around three pillars based on the Europe 2020 strategy.

First, we will mobilise EU policies to fully support growth. For example, rapid progress is needed on important legislative proposals, such as the Single Market Act or the Energy Efficiency Directive. We should also finalise the European patent before the end of the Danish Presidency. The European institutions need to pursue their work on how to better use international trade as engine for growth – several major trade agreements are under way.

Second, we will step up our efforts to finance the economy through investments and better access of SMEs to credit, to complement reforms. We invited the European Investment Bank Board to consider an increase of capital by June to be used in supporting projects across the EU. We welcome the agreement on the pilot on project bonds. And we look forward to the report from the Commission on reprogramming of the current structural funds to support growth and jobs.

Third, we will strengthen job creation. We need reforms and measures to support the labour demand and job-creation. National Job Plans should be given high prominence and be fully used, to exploit synergies between the EU and national level instruments, in particular to combat youth unemployment.

At the end of June, just before the change of rotating Presidencies, the European leaders will meet in Brussels and will discuss the EU’s future Multiannual Financial Framework 2014-2020 for the very first time at the summit level, in the context of the growth agenda in all its forms.

This discussion will set the stage for the high-level negotiations, which will continue during the Cypriot Presidency. Our goal is to conclude them by the end of this year to equip the EU with a growth and job-enhancing tool, which will support – both directly and indirectly – thousands of investments in different areas, from research and development, to enterprises, to transport or energy infrastructure, as well as people seeking jobs or upgrading qualifications.

To achieve best possible results, we, the Cypriot Presidency and myself, need to cooperate very closely and harmoniously, and we will. This is also the topic of our discussion today.

We have also discussed other important initiatives, which will need to be concluded under the Cypriot Presidency, such as levers of the Single Market Act, the completion of the Asylum Package and the proposals from the financial services package.”