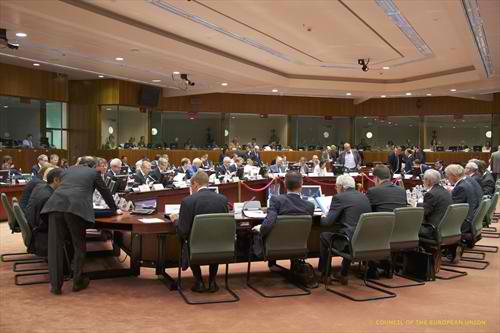 In a European Council recommendation on Greece’s 2012 national reform programme, it is argued that Greece should implement the measures laid down in Council Decision 2011/734/EU of 12 July 2011, as amended on 8 November 2011 and 13 March 2012, and the Memorandum of Understanding on specific economic policy conditionality, which was signed on 14 March 2012.

On 21 February 2012, the Eurogroup agreed on a second economic adjustment programme for Greece. The implementation of the economic policies outlined in the Memorandum of Understanding on Specific Policy Conditionality will contribute to reduce the Greek public debt to 117% of GDP by 2020. It was agreed that the official sector financing of the programme would amount to EUR 130 billion until 2014, additional to the amounts committed in the first financing programme.

The release of the tranches is based on compliance with quantitative performance criteria and a positive evaluation of progress made with respect to the policy criteria laid down in Council Decision 2011/734/EU of 12 July 2011 (as amended on 8 November 2011 and 13 March 2012) and the Memorandum of Understanding setting the economic policy conditionality, which was signed on 14 March 2012.

On 18 April 2012, the Commission adopted a communication on ‘Growth for Greece’ highlighting the positive impact that full and effective implementation of the economic adjustment programme can have by laying the foundations for growth, investment and social renewal. This Communication identifies ways to maximise the impact of early deliverables through swift actions and EU support.

The economic crisis and subsequent fiscal consolidation measures have had an impact on the ability of Greece to achieve the Europe 2020 goals, especially the socially oriented ones. Nevertheless, the structural reforms, particularly those in the labour market, the liberalisation of several sectors and a number of measures to improve the business environment, will help promote competition, spur productivity, increase employment and reduce production costs, thus contributing to an increase in employment and limiting poverty and social exclusion in the medium term. Despite the economic crisis, Greece has continued to work towards achieving the environmental goals of Europe 2020.

A strategic re-programming of the Structural Funds is underway, with a focus on support to youth employment and competitiveness (in particular SME’s). The new measures strengthen actions in the areas of employment passport, training and professional qualifications and access to finance for Small and Medium Enterprises.

Greece has made a number of commitments under the Euro Plus Pact. The commitments, and the implementation of the commitments presented in 2011, relate to fostering employment, improving competitiveness, enhancing sustainability of public finances and reinforcing financial stability.