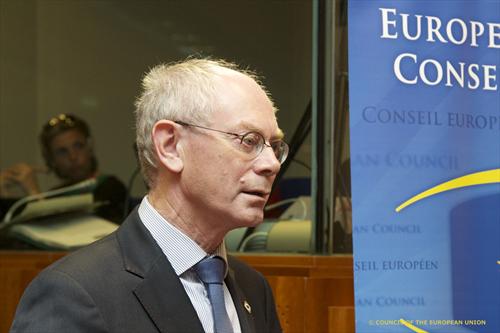 In a speech to the Parliament of Cyprus, President of the European Council Herman Van Rompuy referred to the Greek case: “…Even among exceptional circumstances, the situation in Greece is unique. It has required tremendous efforts and sacrifices from the Greek people. We acknowledge that,” he said.

Rompuy stressed: “It has also called for unprecedented solidarity from the other Eurozone countries. Since 2010, Europe, together with the International Monetary Fund, contributed almost EUR 150 billion of support. Sometimes people ask for a “Marshall Plan for Greece”. Well, Europe’s support amounts to much more than the Marshall Plan! Our solidarity is there!

We are driven by a clear common determination: Greece must remain in the euro area while respecting its commitments. We expect that after the elections, the next Greek government will make that choice. The stakes are high… for all of us in the Eurozone. But unlike two years ago when the Greek crisis started, we now have the tools in place – the European Financial Stability Facility and, soon, the European Stability Mechanism – to guarantee the financial stability of the Eurozone as a whole and help our Member States in overcoming the crisis.

But there is more to be said. It would be a mistake to reduce the financial and debt crisis to such exceptional risks only. It has also brought to light structural challenges that predate it.

– Systemic challenges for the Economic and Monetary Union as such: we must now strengthen its economic policy dimension, alongside its monetary dimension.

– And structural challenges for all our economies. Overcoming them will require tough decisions and decisive actions. To bring down public debts and deficits, restore competitiveness, finance our future.

…Sound public finances and growth are two sides of the same coin. In the long run, you cannot have one without the other. This is why European leaders have worked on both fronts simultaneously. We have tamed the debt crisis, but we have also developed a common strategy for growth and employment…”