EU’s road to stability and growth 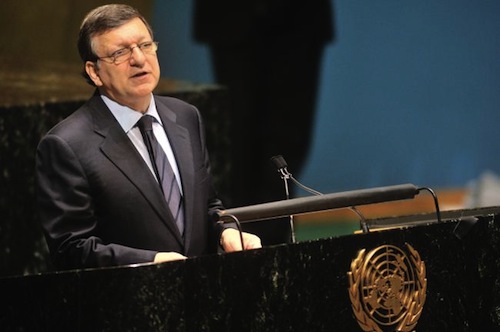 European Commission President José Manuel Barroso in a speech at the General assembly of the United Nations in New York argued: “…The lessons of the financial crisis must be absorbed by all of us. Our institutions, our surveillance mechanisms and our defences all need to be strengthened. The European Union is working towards this, at all levels. And it is also important that others address the different challenges that they are facing in other parts of the world.

In the G20 Europe will push for the implementation and enhanced monitoring of the Cannes Action Plan for Growth and Jobs. Tackling global macroeconomic imbalances and promote growth should remain at the core of the G20 agenda. But not growth driven by unsustainable borrowing. Growth must be socially inclusive and environmentally sustainable. We must strive for solidarity not just within but across the generations…”

Addressing another event, EU Commissioner for Economic and Monetary Affairs and the Euro Olli Rehn: “Our latest European Economic Forecast shows the EU economy to be in a mild and short-lived recession. A slow and subdued recovery is forecast to begin from the second half of the year on, and continue over 2012-13. But this will only happen on the condition that confidence gradually returns and decisive policy action is taken.

In the last quarter of 2011, Europe had fallen into recession. Yet, fresh data published this Tuesday shows that, for the first quarter 2012, growth was, in fact, not negative.

Although the economic climate remains fragile, this does not mean there are no positive signs. At the beginning of this year, we saw global trade growth accelerate once again. This was particularly beneficial for those EU member states that are more open to trade, especially the countries in Northern and central Europe, but also programme countries – Ireland and Portugal, which have recently seen their exports grow well.

GDP growth will remain uneven across Member States. The same applies for unemployment, with some member states enjoying virtually full employment, with others suffering from rising unemployment. It is unbearably high for young people who need hope, confidence and opportunity for their future.

What we are seeing is a rebalancing of the macroeconomic imbalances that built up in Europe before and after the crisis began. Over the last decade, our integrated financial market channelled savings from countries with slow growth in domestic demand into countries with current account deficits, where domestic demand was thriving with credit booms and increasing wages and prices. This applies both within the EU as well as across the Atlantic…”