Posted on: May 6th, 2012 by AlYunaniya Staff No Comments 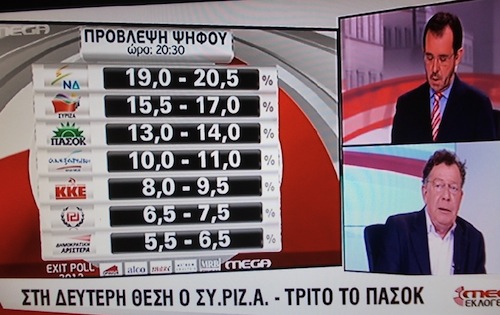 ND and PASOK parties suffered major losses in elections, exit polls showed, throwing into doubt the Eurozone country’s commitment to meeting the tough terms of its two bailouts, according to Kathimerini.

According to exit polls by opinion poll companies ALCO, MRB, Metron Analysis, Opinion and MARC for NET, Alpha, ANT1 and Mega channel, Public Issue for SKAI TV and KAPA Research for TOVIMA.gr, political parties would get:

According to MEGA channel, in a meeting held at ND headquarters just after the exit polls were announced, ND leader Antonis Samaras and his colleagues rejected the scenario of new elections; as noted, Samaras will accept the mandate by the President of the Republic and will attempt to form a government.