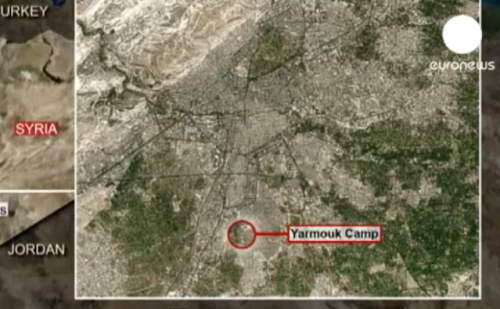 Clashes between rebels and armed Palestinians loyal to Syrian President Bashar al-Assad continue to rage in a Palestinian refugee camp outside Damascus as hundreds of Palestinians flooded into Lebanon in the past hours.

The rebels, fighting to topple President Bashar Assad, took full control of Yarmouk camp on Monday, according to rebel sources while Syrian military have surrounded the camp.

There were no Syrian government troops in the camp and most of the fighting was between rebels and PFLP-GC gunmen, residents said, according to Reuters.

The group is led by Ahmed Jibril, Assad’s longtime ally. Many PFLP-GC fighters defected to the rebel side and their leader Ahmed Jibril left the camp three days ago to the city of Tartous, according to media reports.

The offensive in the Palestinian refugee camp of Yarmouk in southern Damascus is aimed at driving the pro-government Palestinian gunmen out of the camp.

On Monday, Syrian Foreign Minister Walid al-Muallem said the clashes were triggered by the al Qaeda associated Jabhat al-Nusra group, which was labeled by the US as a terrorist organisation last week.

Meanwhile, many residents on Monday fled the area to Lebnanon, according to the UNWRA.

“As the Syria conflict and its impact on civilians continue to escalate, UNRWA is exerting all efforts to respond to the humanitarian needs of Palestine refugees. Over the past several days, Syrians and the over 150,000 Palestine refugee resident in Yarmouk, a suburb of Damascus, have experienced particularly intense armed engagements involving the use of heavy weapons and aircraft,” UNRWA warned.

“Palestine refugees are also fleeing beyond Damascus. Although the scale and direction of this movement cannot be precisely determined, some have made their way to Lebanon. Initial reports indicate that well over 2,000 people have attempted or are attempting to flee the country.”

The opposition says more than 40,000 people have been killed since the Syrian uprising began in March last year.