Posted on: October 23rd, 2012 by Romana Turina No Comments 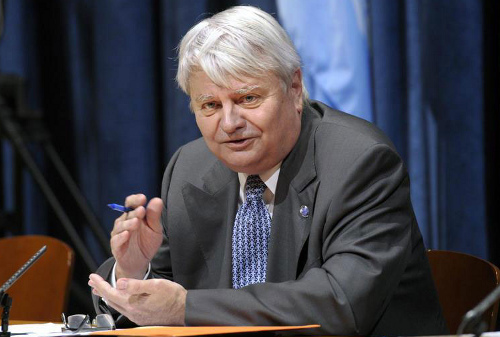 Under-Secretary-General for Peacekeeping Operations Hervé Ladsous highlighted the need for flexibility and increased coordination among international actors to ensure peacekeeping missions address the needs of the countries they operate in, within the context of financial restraint.

“We are a global partnership. In order to achieve our mandates, we need support and strong cooperation between the Security Council, Member States and the Secretariat, so that we collectively focus on addressing the needs of the countries in which we are deployed,” Hervé Ladsous, told a news briefing at UN Headquarters in New York.

The budget for UN peacekeeping operations for the fiscal year 1 July 2012 to 30 June 2013 is about $7.23 billion – less than half of one per cent of world military expenditures in 2010, according to Department of Peacekeeping Operations (DPKO).

Currently, the DPKO leads 16 peace operations around the world. In accordance with the UN Charter, every UN Member State is legally obligated to pay their respective share towards peacekeeping, based on a special scale of assessments. In addition, troops which can serve as ‘blue helmets’ are also sought from Member States.

These include the UN Stabilization Mission in Haiti (MINUSTAH), the United Nations-African Union operation in Darfur (UNAMID), the UN Mission in Liberia (UNMIL) and the UN Integrated Mission in Timor-Leste (UNMIT), the last of which is expected to close at the end of this year. However, the economic crisis had an impact in financial resources provided to make the projects possible, and Mr Ladsous stated that “On balance, we are seeing modest overall reduction which gives us a strategic opportunity to focus on the quality and capabilities of peacekeeping,” He also added that financial constraints require peace missions to be versatile and creative in the implementation of their mandates from the Security Council.

The West African nation of Mali figured prominently in the UN official’s remarks. He stated that the two main priorities there remain restoring constitutional order and helping the country regain its sovereignty.

Currently Mali has been dealing with a range of security, political and humanitarian problems. Fighting between Government forces and Tuareg rebels broke out in the country’s north in January. Since then, radical Islamists have seized control of the north, where they have imposed an extremist version of Muslim Sharia law as well as restrictions that target women in particular.

Mr. Ladsous stressed that during a meeting of the international community last week in Bamako, Mali’s capital, there had been consensus amongst the UN, the Malian authorities, the African Union (AU) and the Economic Community of West African States (ECOWAS) that the two priorities should be achieved through political solutions.

DPKO, Mr Ladsous noted, has started to work with the Malian authorities, ECOWAS and the AU to plan the international military force that may ultimately be required for the recovery of the country’s north. He added that there will be another meeting in Bamako early next week to refine the concept of operations with all parties that are willing to contribute. In view of the meeting, the Security Council unanimously adopted a resolution which held out the possibility of endorsing an international military force to restore the unity of the West African nation, within 45 days.

Mr. Ladsous offered remarks on other operations as well. Regarding the ongoing crisis in the eastern Democratic Republic of the Congo (DRC), he said the UN Stabilization Mission in the DRC (MONUSCO) is taking a firm position in view of its mandate to support DRC forces and protect civilians, but emphasized that wider political action is needed to find a lasting solution.

The DRC’s eastern provinces of North and South Kivu have witnessed increased fighting between Government troops and the M23, which is composed of renegade soldiers who mutinied in April. The fighting has displaced more than 300,000 people, including many who have fled to neighbouring Rwanda and Uganda, as well as within DRC. MONUSCO has clashed with members of M23 on several occasions.

“It is very important that all external support to the M23 cease and that a regional dialogue can develop,” Mr. Ladsous said, noting that two solutions have been put forward at meetings of the International Conference on the Region of the Great Lakes (ICGLR).

One of these is the establishment of an international force to work alongside MONUSCO to pacify the Kivus, and the other, the so-called Expanded Joint Verification Mechanism (EJVM), was launched in September, in the eastern DRC town of Goma. The mechanism is a technical body, comprising military experts from both DRC and Rwanda, as well as other ICGLR countries and supported by the AU and the UN, to address DRC-Rwanda border security issues, amongst other tasks.

Mr. Ladsous also discussed Sudan and South Sudan, particularly their achievement in avoiding violence between them over the past six months. “In April this year the two countries were terribly close to open war and fortunately an all-out conflict has been avoided,” he said, commending the AU for its role as intermediary in related peace talks.

Regarding the situation in Syria, Mr. Ladsous said the main focus right now rests on supporting the efforts of the Joint Special Representative of the UN and the League of Arab States, Lakhdar Brahimi, to help Syria achieve a cessation of violence and ultimately bring about a political process that meets the legitimate aspirations of the Syrian people.

At the same time, DPKO is preparing plans should a ceasefire take place and the Security Council calls for the involvement of UN peacekeepers. However, he noted, it was still too early to say what size of force, and precisely what kind of peacekeeping mandate and force, could be called for.

Syria has been wrecked by violence, with an estimated 20,000 people, mostly civilians, killed since the uprising against President Bashar al-Assad began some 20 months ago. Some 2.5 million people are also in need of humanitarian assistance, according to UN estimates.

The Secretaries-General of the United Nations and the League of Arab States – Ban Ki-moon and Nabil El Araby – have called on all warring parties in Syria to heed the call of Joint Special Representative Brahimi for a ceasefire in all its forms during the Muslim holiday of Eid al-Adha, which takes place on Friday, and called on international actors to support this appeal.

During the range of topics covered in his news briefing, Mr. Ladsous also spoke of the general work of UN peacekeepers, to whom he paid tribute for their efforts and sacrifices: “Let us never forget the sacrifices made by our peacekeepers,” he said. “This year alone, a total of 73 peacekeepers have died serving in the cause of peace.”