First group of Iranian exiles relocated from Iraq to Albania 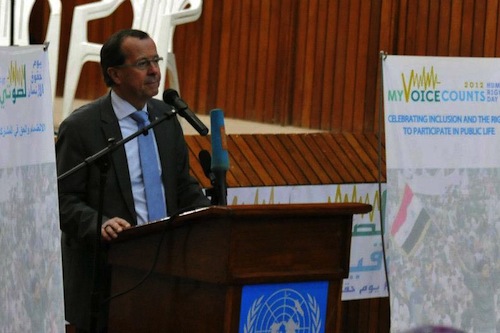 The top United Nations official in Iraq called the relocation of 14 Iranians to Albania from an exile camp near Baghdad, an “encouraging first step.”

“The residents’ arrival in Albania is an encouraging first step in the relocation of the group of 210 residents the Albanian government has agreed to receive,” said the UN Special Representative for the Secretary-General and head of the UN Assistance Mission in Iraq (UNAMI), Martin Kobler.

More than 3,000 residents, most of them members of a group known as the People’s Mojahedeen of Iran, are temporarily housed in a transit facility called Camp Liberty – also know as Camp Hurriya – while the Office of the UN High Commissioner for Refugees (UNHCR) carries out a process to determine their refugee status.

Kobler said that the departure of the group from Iraq is in accordance with the memorandum of understanding of 25 December 2011, which foresees the relocation of the residents to third countries. “I thank the Government of Albania and encourage other Member States to come forward and to receive residents in their countries as well.”

Following the original offer by the Albania Government to assist in the resettlement, Secretary-General Ban Ki-moon said he “unequivocally supports” Kobler’s efforts “to courageously and creatively, in exceptionally difficult circumstances, help resolve this situation.”

In addition, in his recent report about the situation in Iraq, Ban urged those who express support for the residents of Camp Hurriya and the remaining residents of another camp, New Iraq, to stop spreading insults and falsehoods about Kobler and instead help to promote a durable solution.

Following Albania’s announcement, the Government of Germany offered humanitarian admission for approximately 100 residents of the camp.