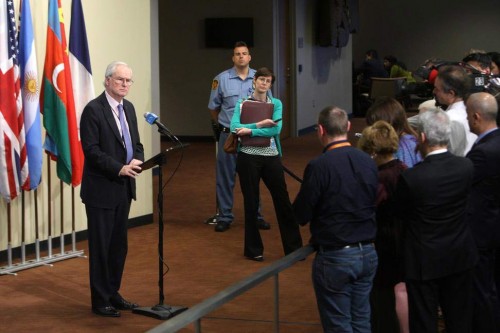 The United Nations Security Council has renewed its call to Libyans to resolve disagreements peacefully and through dialogue following recent fighting in Benghazi.

“The Members of the Security Council expressed deep concern about the recent acts of violence in Benghazi which claimed lives of many people and called upon all Libyans to rally around their legitimate institutions, both civilian and military,” the 15-member Council said in a statement released to the press last night.

The Council also “encouraged all Libyans to engage with the political process of reconciliation and constitutional reform through peaceful and inclusive means, underpinned by respect for the rule of law.” The Members of the Security Council expressed deep concern about the recent acts of violence in Benghazi which claimed lives of many people and called upon all Libyans to rally around their legitimate institutions, both civilian and military.

Mr. Mitri, who also heads the UN Support Mission in Libya (UNSMIL), said that managing Libya’s democratic transition is bound to be difficult given the legacy of decades of brutal rule and that the country could benefit from a national political dialogue on the way forward.

Muammar al-Qaddafi ruled the North African country for more than 40 years until a pro-democracy uprising in 2011 – similar to the protests in other countries in the Middle East and North Africa – led to civil war and the end of his regime.

In today’s statement, the Security Council also called on Libyan authorities “to investigate all violations of human rights and bring the perpetrators of such acts to justice.”

They expressed serious concern about the continued arbitrary detentions without access to due process of thousands of persons held outside the authority of the state and called for their immediate release or transfer to detention centres under state authority.

The Members also condemned cases of torture and mistreatment observed in illegal detention centres in Libya, and emphasized that practices of torture and extra-judicial killing should not be tolerated.