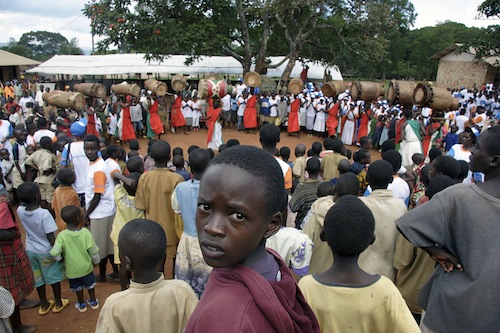 As the leaders of the Group of 20 (G20) leading economies meet in Mexico, the United Nations food and agriculture agencies have called on them to redouble their efforts to fight hunger. The G20 leaders, as well as Secretary-General Ban Ki-moon, were attending a summit, which ended yesterday, in Los Cabos, Mexico.

In a joint statement, the Food and Agriculture Organization (FAO), the International Fund for Agricultural Development (IFAD) and the World Food Programme (WFP) welcomed the priority given to food and nutrition security at the summit.

The three Rome-based agencies also welcomed the continuing recognition by the G20 of the pivotal role of smallholder agriculture to global food security and to boosting productivity in a sustainable manner. “And we urge for food and nutrition security to remain prominent on the G20 agenda in the coming years,” they added.

The three food and agriculture agencies noted that food security is closely linked to other issues on the agenda of G20 – such as infrastructure development and restoring growth in countries in crisis.

“In the past few years we have seen how food insecurity can trigger instability and crisis, and the major toll that the latter can take on food security in return. We now know that food insecurity can have a long-lasting negative impact on the growth prospects of entire societies,” they said. “This suggests that attention to food security needs to be maintained-perhaps especially so – in times of financial crisis and uncertainty.”

The agencies also pointed out that another lesson from recent crises, such as that affecting the Horn of Africa, is the need to move away from a dichotomy between humanitarian and development assistance. “We are already working in that direction,” the trio said.

In the final point of their joint statement, WFP, IFAD and FAO said that building a sustainable future requires broad partnerships, supporting developing country governments in their leading role and mobilizing around that the commitment of international agencies, civil society, the private sector and the wider humanitarian and development community.

“Ensuring food and nutrition security also demands inclusive partnerships,” the agencies said. “This is something to which we are fully committed in our own work.”