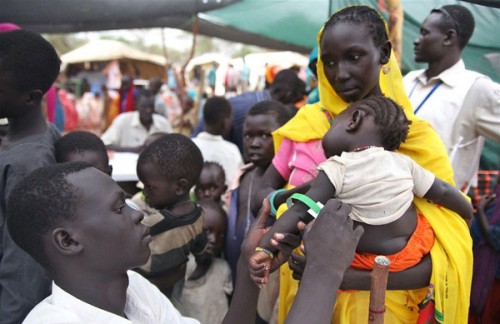 In what the United Nations World Food Programme (WFP) is calling a “major breakthrough,” the first UN food rations have reached conflict-affected people in Sudan’s Blue Nile state since 2011, when the isolated rural area near the South Sudan border was cut off by insecurity and movement restrictions imposed by the Government.

“While we continue to strive for access to all areas, this is still a major breakthrough which will enable us to assist those who continue to be displaced by the conflict or those who have decided to return to their homes and are in dire need of food assistance,” said WFP’s Country Director in Sudan, Adnan Khan.

Fighting between the Sudanese armed forces and the rebel Sudan People’s Liberation Movement-North (SPLM-N) broke out in Blue Nile state in September 2011, after neighbouring South Sudan seceded under the 2005 Comprehensive Peace Agreement that ended a decades-long civil war. The fighting in Blue Nile displaced and then isolated tens of thousands of people.

“We are giving a two-month ration for this first round of distribution, following an assessment which we carried out early last month in two of the areas most severely affected by the conflict, Geissan and Kurmuk,” said WFP Programme Officer Arduino Mangoni. He is in Geissan leading a team that monitors the distribution of food to 12,000 people. WFP plans to reach an additional 39,000 people in Kurmuk.

Additional WFP staff are in four other localities in Blue Nile state to determine how people are coping with their food needs, what food is available in the market and at what price.

“The overall plan is to assist all those we can reach in the six localities before the onset of the rainy season in May,” Mr. Khan said.

WFP has said it will need an additional $20.5 million to buy 17,000 metric tons of food it estimates will be needed.