Posted on: September 18th, 2012 by AlYunaniya Staff No Comments

Football teams to play against hunger in Asian Champions League 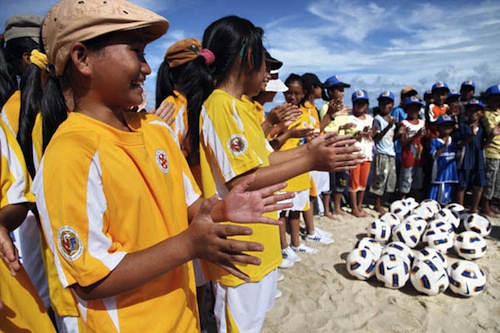 Asian football clubs competing in this year’s top continental competition will not only be scoring goals for glory but also against hunger, the United Nations Food and Agriculture Organization (FAO) announced.

In a repeat of last year’s successful campaign, which saw the Asian Football Confederation (AFC) team up with FAO to raise over $400,000, the two organizations are once again joining forces for the 2012 “Asian Football against Hunger” initiative to generate funds for FAO-led projects targeting poor rural communities across Asia.

“The world’s hungry and poor cannot wait for our help. They need immediate and lasting solutions that will help them feed themselves,” declared Hiroyuki Konuma, FAO Assistant Director-General and Regional Representative for Asia and the Pacific.

“Football is the perfect way to encourage people to team up and make a difference,” Konuma added.

As part of the initiative, football fans of the remaining eight teams in the AFC Champions League playoffs will be urged to donate in support of FAO projects.

From improving the nutrition of school children in Bhutan with a school garden to increasing incomes from bamboo plantations in Thailand, these projects operate at relatively low cost and contribute dramatically in the fight against hunger across Asia, where more than half of the world’s hungry reside.

“AFC and Asian football are fully behind the ‘Asian Football against Hunger’ campaign and we are proud to join hands with FAO in raising awareness of the importance of ending hunger,” said AFC Acting President Zhang Jilong.

The knock-out stage of the AFC Champions League, the continent’s most illustrious football competition at club level, will take place from 19 September to the final in early November when one of the participating clubs will be crowned continental champion.