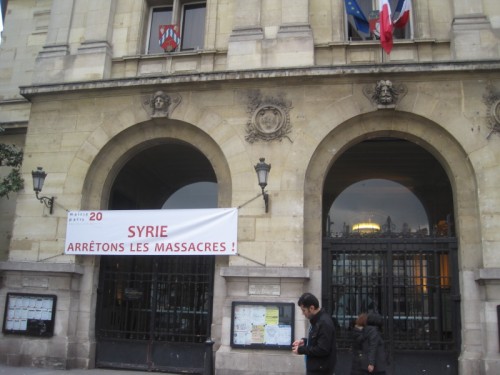 Foreign minister, Alain Juppe, has said the UN Security Council should prepare for military option in Syria if an international peace plan fails to end the violence in Syria.

Alain Juppe, demands at least 300 U.N. observers on the ground in Syria within two weeks and would push for a Chapter 7 resolution which allows the use of force at the United Nations if Damascus does not comply by early May, according to AP.

France would take under consideration peace envoy Kofi Annan’s report due on May 5 as a deadline for Damascus to meet the terms of the plan.

His comments come as activists reported on Wednesday the deaths of dozens of people by government forces.

He claimed that Assad’s government has not honoured the pledges to withdraw its military from cities and towns.  ”We cannot allow ourselves to be defied by the current regime,” Juppe said.

“This cannot continue. We want to see observers in sufficient numbers, at least 300 … deployed as quickly as possible,” Juppe said.

“If that does not work, we cannot allow the regime to defy us. We would have to move to a new stage with a Chapter 7 resolution at the United Nations to take a new step to stop this tragedy,” Juppe said.

At least 40 people were killed across the country on Wednesday, Al Arabiya reported.