Funding slowdown threatens to roll back progress made in combating malaria 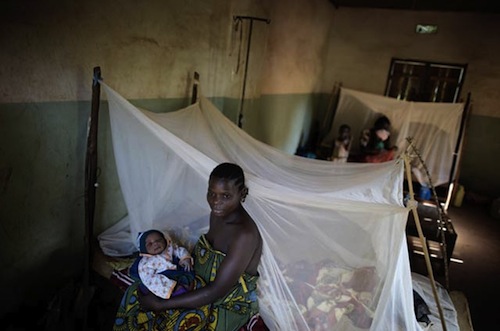 A significant slowdown in global funding of anti-malaria campaigns threatens to roll back impressive gains made against the preventable mosquito-borne disease over the last decade, the United Nations health agency said, as it released its annual assessment report on the disease.

In its World Malaria Report 2012, the World Health Organization (WHO) notes that rapid expansion in global funding for malaria prevention and control between 2004 and 2009 levelled off between 2010 and 2012.

“These developments are signs of a slowdown that could threaten to reverse the remarkable recent gains in the fight against one of the world’s leading infectious killers,” the Geneva-based agency said in a news release on the report.

Malaria struck an estimated 219 million people globally in 2010, killing about 660,000, mostly children under five years of age, WHO stated.

“If we fail to come together and urgently resolve the shortfall, there will be no averting a humanitarian crisis,” the UN Secretary-General’s Special Envoy for Malaria, Ray Chambers, said in the WHO report’s findings.

“Millions of children can be saved in the coming years with methods that have already proven their success, yet we will lose this chance if funds are not mobilized immediately,” he added.

The Global Fund has supplied more than half of the $10 billion in international funding since 2007, with other leading donors including the United States President’s Malaria Initiative, the United Kingdom, the World Bank, and the WHO-hosted drugs-purchasing organization launched in 2006 called UNITAID.

Key now is how those funding mechanisms will be topped up amid changes in the way some operate, according to Mr. Chambers’ office.

“The replenishment and recapitalization of the Global Fund, which… emerged from a year of crucial reforms in September of 2013, will be a decisive factor in determining if the progress is able to be maintained, as will additional funding from other primary funders, including the World Bank’s International Development Association, or IDA, which is also seeking a replenishment next year, and continued support from the United States and United Kingdom,” stated a release from the UN malaria envoy’s office.

Some 80 per cent of malaria deaths occur in 14 endemic countries, with Nigeria, Democratic Republic of the Congo and India among the worst affected.

According to WHO, the initial funding scale-up is credited with saving 1.1 million lives – 58 per cent of them in countries where the spread of the disease had been most marked.

“We cannot achieve further progress unless we ensure that sustained and predictable financing is available,” said WHO’s Executive Director, Dr. Margaret Chan. “We must act with urgency and determination to keep this tremendous progress from slipping out of our grasp.”

The funding slowdown, which is occurring just three years before UN Secretary-General Ban Ki-moon’s deadline for reaching near zero malaria deaths at the end of 2015 – as called for by the anti-poverty targets known as the Millennium Development Goals (MDGs) – is already having an impact on the ground.

“The number of long-lasting insecticidal nets delivered to endemic countries in sub-Saharan Africa dropped from a peak of 145 million in 2010 to an estimated 66 million in 2012,” WHO said. “This means that many households will be unable to replace existing bed nets when required, exposing more people to the potentially deadly disease.”

The health agency also cited a slowdown for indoor residual spraying programmes in its Africa administrative zone, highlighting that only 11 per cent of a total at-risk population of 77 million throughout the western, central and southern parts of the continent were covered in 2010 and 2011.

WHO said the international funding for malaria appears to have reached a plateau “well below the level required” to reach the targets set by world governments and institutions in 2000 with the adoption of the MDGs, which have a target deadline of 2015.

The WHO report states that an estimated $5.1 billion is needed every year between 2011 and 2020 to achieve universal access to malaria interventions in the 99 countries with on-going malaria transmission.

While many countries have increased domestic financing for malaria control, the total available global funding remained at $2.3 billion in 2011 – less than half of what is needed, WHO said.

For its part, Chambers’ office highlighted that more than 90 per cent of the world’s malaria deaths occur in sub-Saharan Africa, adding that approximately $3.6 billion in additional funding was required for anti-malaria programmes in that region between now and 2015.

It added that, in order to stave off backsliding and resurgences as early as 2013 and 2014, $2.4 billion is urgently required, of which $1 billion is needed in Nigeria alone.