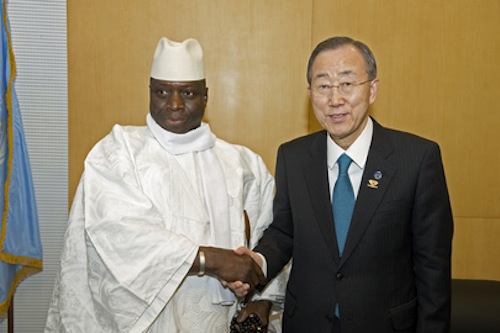 The United Nations human rights chief urged Gambian authorities to impose an immediate moratorium on the use of the death penalty, after nine people were executed on Sunday and President Yahya Jammeh announced that all remaining death row inmates would be executed, by firing squad, by mid-September.

“I urge the Gambia to immediately stem this regression in human rights protection, and to impose an official moratorium, effective immediately, on the use of the death penalty,” said the UN High Commissioner for Human Rights, Navi Pillay.

“The statement by President Yahya Jammeh that all remaining death sentences would be carried out by mid-September is extremely worrying, and raises serious questions about the motivation behind the sudden rush to execute,” she added. “A further statement by the Ministry of the Interior, which seeks to justify the change of policy, is seriously misguided.”

Until now, Gambia was at the forefront in the region’s efforts to abolish the death penalty in law and practice, with a moratorium on the death penalty for 27 years and the abolition of capital punishment for drug offences in April 2011.

Prior to the nine executions carried out on 26 August, the last official execution in the West African nation took place in 1985, according to the Office of the UN High Commissioner for Human Rights (OHCHR).

“The Gambia has, for almost three decades, been one of the increasing number of States that did not practice capital punishment – until this sudden, grave, unfortunate change of course,” Pillay said, adding that this represented an unfortunate setback for human rights protection in the country.

Pillay voiced her concern over the fairness of the trials of some of the people sentenced to death, as well as the lack of transparency surrounding the identity of those who were executed.

“The confusion and lack of transparency for several days over whether the executions actually took place, and accompanying uncertainty about the identity of those executed, is unacceptable, particularly for the family members of those killed. Secretly executing individuals without informing their families amounts to inhuman treatment,” Pillay said.

The High Commissioner also warned that international law, including the International Covenant on Civil and Political Rights, which Gambia has ratified, requires compliance with rigorous fair trial standards in cases where death sentences are imposed.

“I urgently call on the President and relevant authorities in the Gambia to heed all the international, regional and local calls on the Government not to carry out further executions,” she said, adding that “the moratorium that was in place for the past quarter of a century was something the country could be proud of, and was respected for.”

Pillay’s call follows that of the UN Special Rapporteur on extrajudicial, summary or arbitrary executions, Christof Heyns, who on Wednesday strongly condemned the recent executions and called on the Government to refrain from executing others on death row.