Posted on: November 21st, 2012 by Tina Michalitsis No Comments 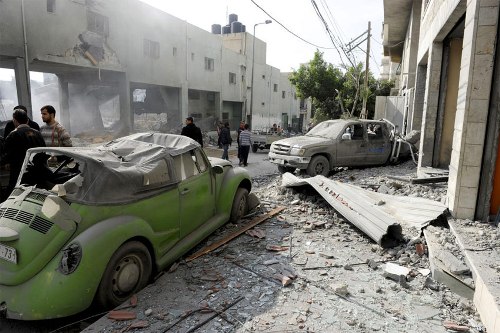 The head of the United Nations agency tasked with assisting Palestinian refugees stressed yesterday the need to avoid any further escalation of the latest violence between Gaza and Israel, as he saw firsthand the destruction wreaked on the territory by Israeli airstrikes.

“We really hope that a ground offensive will not happen, because – among many other things – it will also cause a lot of humanitarian problems,” said the Commissioner-General of the UN Relief and Works Agency for Palestine Refugees in the Near East (UNRWA), Filippo Grandi.

The latest wave of violence – which includes rocket attacks against Israel from Gaza, and Israeli airstrikes on Gaza – began on 14 November. A chorus of UN officials, beginning with Secretary-General Ban Ki-moon, have appealed for an end to the violence and strongly urged the parties to achieve an immediate ceasefire.

That appeal was echoed by Grandi, who met with refugees living in Gaza, and spoke to staff at a distribution centre which was badly damaged in airstrikes in the town of Jabalia. The centre was subsequently repaired by staff to enable food distributions to thousands of refugees.

Home to nearly 1.7 million people, Gaza is a small but densely populated area, which has been under an Israeli blockade since 2006 and suffers from a faltering economy and rampant poverty.

Speaking at a press encounter with Israeli Prime Minister Benjamin Netanyahu in Jerusalem yesterday, Ban stated his immediate concern is for the safety and well-being of all civilians, in Israel and in Gaza.

“Rocket attacks by Palestinian militants targeting Israel must cease immediately,” he said, while also calling on Israel to exercise maximum restraint. “I strongly cautioned against a ground operation, which will only result in further tragedy.

“I have also stressed that while Israeli rockets may be aimed at military targets inside Gaza, they kill and injure civilians and damage civilian infrastructures. The loss of civilian lives is unacceptable under any circumstances.”

The UN chief noted that innocent people, including children, are being killed and injured on both sides, and appealed to all those commanding, bearing and operating arms to respect international humanitarian law to ensure the protection of civilians at all times.

The Secretary-General arrived in Israel following talks in Cairo with officials of the Egyptian Government and the League of Arab States. He is scheduled to travel next to Ramallah in the West Bank to meet with the head of the Palestinian Authority, President Mahmoud Abbas.

Most UNICEF activities in Gaza are suspended due to insecurity, but five UNICEF-supported emergency psychosocial teams are visiting children and families affected by the violence in their homes or at hospitals whenever conditions permit.

“Terrified by the sounds of air raid sirens, children in southern Israel and Tel Aviv run into shelters several times a day to escape death,” it added in a news release. “In Gaza, many sleep in the cold. Windows are left open for fear of injury from glass shards if windows are blown by explosions. Trapped by the six year blockade and poverty, they have nowhere to go.”

The agency added that medical supplies to treat severely injured patients are urgently needed. Plastic sheeting to seal broken windows, fuel to run generators for hospitals and water and sanitation facilities, and chlorine for water treatment plants are scarce.

Meanwhile, the UN World Food Programme (WFP) was scheduled to begin food distributions for more than 30,000 people to prevent the conflict from deepening hunger in Gaza, which is already a food-insecure area.

“We are deeply concerned about the situation in Gaza and will continue to assist the most vulnerable households, many of whom have been affected by the violence,” said WFP’s Country Director in the occupied Palestinian territories, Pablo Recalde.

WFP has enough food in its Gaza warehouses to cover the food needs of 285,000 people, about 60 per cent of the non-refugee population, for one month. It has enough food outside of the area to last its residents another two months if necessary.

However, access to Gaza is challenging even under normal circumstances, noted the agency, which is concerned about its ability to continue reaching those in need should the conflict escalate.