Global migration can spur opportunity for social and economic growth 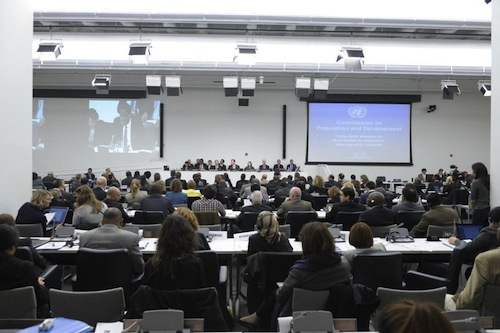 The United Nations Commission on Population and Development kicked off a five-day session today with a call for the international community to seize upon the opportunities for social and economic growth presented by demographic shifts resulting from global migration.

“Migration is a fact of life in our globalizing world. “Secretary-General Ban Ki-moon stressed.

“It is not a question of whether to halt the movement of people across borders. The question is how we plan for such movements and make the most of them.”

The global total of international migrants has increased to 214 million in 2010 from 155 million in 1990, with the number of internal migrants even larger as most move within their countries rather than across national borders, according to the Secretary-General’s latest report on new trends in migration.

Among major factors contributing to these growing trends, the report spotlighted changes in socio-economic conditions, conflict, environmental degradation, an increase in human trafficking and the integration and disintegration of countries.

Given the growing numbers of international migrants, Mr. Ban urged the global community to pursue “five key goals” in resolving what he described as “a complex issue that demands a comprehensive solution.”

In particular, he underscored the need for safe, legal channels of migration; the alignment of migration policies to the demands of the labour market; addressing the problems of those migrants without legal status; promoting integration into host societies; and facilitating so-called return or circular migration that allows migrants to return to their native homes at the right time.

“Migration is often a hot-button issue,” admitted Mr. Ban, who pointed to the fact that smaller countries tend to suffer when skilled people leave. But, he noted, they also benefit from remittances, while destination countries benefit from needed labour and economic growth.

In his address to the Commission, Under-Secretary-General for Economic and Social Affairs, Wu Hongbo, concurred that migration remains “a dynamic driver” of development for countries on the receiving end.

“An increasing number of migrants are going to new places in different directions compared to 20 years ago, while others follow well-worn paths,” Mr. Wu stated.

“For most, the migrant’s age-old goal remains the same, and that is to seek new opportunities to improve the lives of themselves and their families, while contributing to the growth and wellbeing of host countries.”

On a cautionary note, Mr. Ban warned that migration should “not be the primary solution to the demographic challenge.”

“The best response to population trends is to implement the Cairo Programme of Action on Population and Development,” he continued. “This includes empowering women, providing all people with access to reproductive health care, and educating the next generation.”

Adopted in 1994 by 179 Member States, the Programme of Action articulated “a bold new vision about the relationships between population, development and individual well-being,” according to the UN Population Fund.