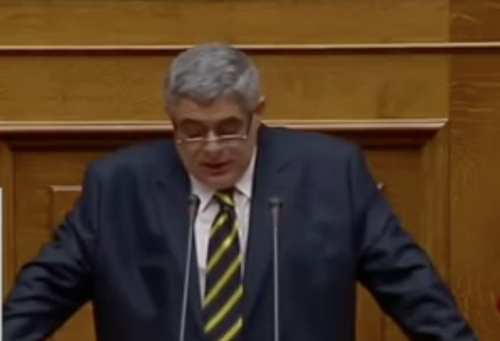 Greece’s far-right Golden Dawn party handed out free food outside parliament on Wednesday  but only to card-carrying Greek citizens and not to immigrants.

Volunteer members of the party dressed in black gave milk, pasta, olive oil and patatoes to Hundreds who stood in line at Athens’ main Syntagma Square, showing their ID cards to validate their citizenship in order to receive assistance as the country’s poverty and unemployment rates continue to soar.

Golden Dawn spokesman Ilias Kasidiaris said the food came from Greek firms and Greek producers only. The party ignored a local authority ban on allowing the food handout in the square.

In July, the far-right Golden Dawn party was accused of organizing a racist blood drive. The party was trying to get Greeks to donate blood exclusively to other Greek-born citizens.

Golden Down, which many say is neo-Nazi, is known for constant assaults on immigrants.

In mid-July, the Greek Human Rights Watch rang an alarm, saying migrants were being attacked all over the country. Although there was no direct evidence of Golden Dawn’s connection to those attacks, Human Rights Watch said some facts suggest that the extremist party was involved in the attacks.

Anti-immigrant sentiment in Greece is largely fueled by the economic crisis the country faces. Greece has always been a gateway for immigrants coming from Asia and Africa to Europe in large numbers.

Public support for the party has dramatically increased, twenty-fold, since elections in 2009, according to AP. This May, Golden Dawn gained 7 per cent of the vote at the parliamentary elections, managing to pass the threshold for the first time.