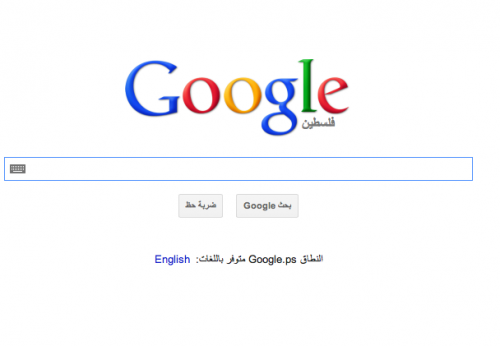 The International web search engine “Google” recognized the state of Palestine after it was referring to it as “The Palestinian Territories” since its establishment.

The change, introduced on 1 May, means google.ps now displays ‘Palestine’ in Arabic and English under Google’s logo.

The move on Wednesday follows the UN  decision in November to recognise Palestine as a “non-observer state” in spite of objections by the US and Israel.

The resolution on the status of Palestine in the UN was adopted by a vote of 138 in favour to nine against with 41 abstentions by the 193-member Assembly.

Google spokesman Nathan Tyler told the BBC: “We’re changing the name ‘Palestinian Territories’ to ‘Palestine’ across our products. We consult a number of sources and authorities when naming countries.

“In this case, we are following the lead of the UN, Icann [the Internet Corporation for Assigned Names and Numbers], ISO [International Organisation for Standardisation] and other international organisations

Sabri Saadat, a spokesman for President Mahmoud Abbas of the Palestinian Authority, welcomed the move and called it a step in the right direction

Israel however questioned the move, saying that it raised questions about the company’s involvement in international politics.

“This change raises questions about the reasons behind this surprising involvement of what is basically a private internet company in international politics, and on the controversial side,” Yigal Palmor, Israeli foreign ministry spokesman, told AFP news agency.

The Israelis and Palestinians have yet to resume direct negotiations since talks stalled in September 2010, after Israel refused to extend its freeze on settlement activity in the occupied Palestinian territory.

Some have interpreted the change as a small victory for Palestine.