Posted on: August 27th, 2013 by Dimitris Ioannou No Comments 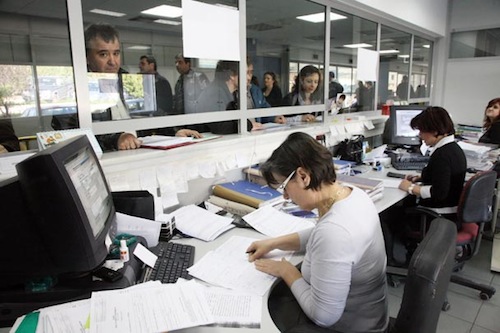 Greece will keep its timelines and 12,500 civil servants will be placed on mobility by the end of September, Administrative Reform Minister Kyriakos Mitsotakis said yesterday, following a meeting of the Administration Reforms Council at Maximos Mansion.

According to AMNA, the meeting focused on the restructuring of ministries and agencies and on the mobility scheme that will see some civil servants transferred to cover needs elsewhere and others placed on a gradual layoff programme.

“We ratified the relevant decisions,” Mitsotakis said, “in order for the country to keep its timelines and place on mobility 12,500 civil servants by the end of September.” He added that mobility is an obligation Greece has but will also lead to improved use of existing staff and added that in the first phase of the plan already carried out, all civil servants were transferred to services that were short-staffed.

Mitsotakis described the institution of mobility as a positive tool that will help to better exploit the potential of the public sector and not a memorandum obligation of Greece, protothema.gr writes.

The meeting, chaired by Prime Minister Antonis Samaras, was also attended by government Vice President and Foreign Minister Evangelos Venizelos and several ministers whose ministries’ restructuring was under review.

According to enet.gr, during the government meeting yesterday, a new list was finalised containing the names of 8,099 civil servants who will be placed in the mobility scheme by the end of next month.

Civil servants placed in the mobility scheme will be involuntarily transferred or paid 75% of their already-reduced salary for up to eight months and then fired if another position can’t be found for them. The decision brings the total number of public service employees to be placed on the scheme to 12,500.

The list draws on staff in all 17 ministries, with the largest number – the 3,000 members of the municipal police – coming from the interior ministry.

Last month, 4,401 civil service employees (2,114 teachers, 2,234 school guards and janitors and 53 staff from the administrative reform ministry) were informed that they were being transferred.