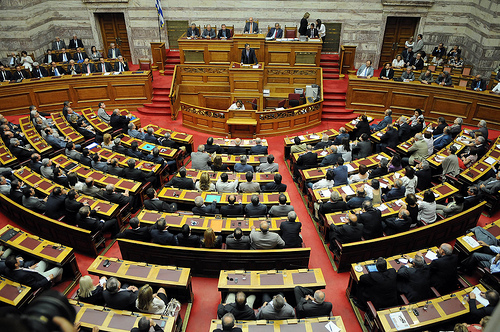 The Ministry of Justice’s controversial anti-racism law was submitted to the Central Lawmaking Committee in Parliament, which declared the law to be sound.

According to media reports, the bill would outlaw incitement against people because of their race, religion, ethnicity or sexual orientation, and impose jail sentences of up to six years on offenders, according to reports.

Parliament’s Lawmaking Committee convened earlier this week and found that that anti-racism law is not in conflict with the Constitution. However, it was noted that certain essential terms regarding the law need to be better defined and clarified (such as “hate”, “genocide” and “ethnicity”).

According to protothema.gr, PASOK and the Democratic Left support it as it stands and SYRIZA agrees with it but it stumbles upon strong reactions by ND, Golden Dawn and KKE. ND and Maximos Mansion disagree with the bill and the arrangements for dealing with the racist action of Golden Dawn.

The ND’s argument is that the very harsh provisions may result in the opposite effect and reinforce Golden Dawn. Also, according to enet.gr, New Democracy officials concluded during a meeting that Greece has had anti-racism legislation since 1979.

PASOK leader Evangelos Venizelos said that the country has an international obligation to vote for the anti-racism bill, which is “an essential measure to protect a democratic state ruled by law”, criticising the delay in submitting the bill to parliament and stressing that “any outstanding issues must be immediately dealt with by the three coalition leaders”.

Democratic Left officials have called on New Democracy to “leave the procedural tricks and agree to submit the bill to parliament for approval”.