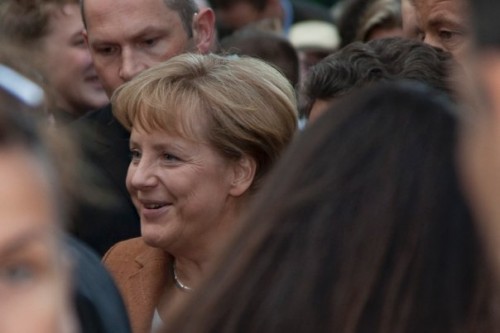 Greece steps up security measures as German Chancellor Angela Merkel is set to visit Athens for the first time since Europe’s financial crisis broke out there three years ago.

German Chancellor Angela Merkel will arrive in Athens Tuesday at 12.00. She will meet with President Karolos Papoulias for about half an hour and then visit Maximos Mansion (2 p.m.) for a meeting with Prime Minister Antonis Samaras. A joint news conference will follow.

According to Kathimerini, some 7,000 police officers are going to be placed on duty for the visit. Police officers will be brought in from outside Athens as the government steps up security measures for the chancellor’s first trip to Greece since 2007. Greek media reported that the German embassy and the Goethe Institute will receive additional protection.

At the same time, Greece’s two largest unions, GSEE and ADEDY, have called for a demonstration in front of the Finance Ministry in central Athens at 6 p.m. on Monday. The unions said they want to express their opposition to the austerity measures being negotiated by the government and the troika. The unions have also called a three-hour work stoppage from noon on Tuesday to coincide with the visit of Chancellor Angela Merkel.

Meanwhile, SYRIZA has encouraged its supporters to take part in the protest and vent their dissatisfaction with the austerity measures being implemented in Greece. Independent Greeks party has also called for a separate rally outside the German embassy in Athens (a human chain to be formed around the building as a symbolic protest). Members of the Communist Party-affiliated union, PAME, will hold a separate demonstration at 1 p.m., at Omonia Square.

Relations between Greece and Europe’s Germany have been strained, with Merkel blamed in Athens for imposing austerity at all costs and the Greeks criticised in Berlin for not fulfilling their obligations.

On Sunday, government and opposition parties described the chancellor’s visit to Greece as a chance to show solidarity and recognition of its efforts.

Merkel’s trip to Athens is “an act of recognition for the Greek government which is under great pressure with its reform policy,” Foreign Minister Guido Westerwelle said.

However, German Finance Minister Wolfgang Schaeuble insisted on Sunday that Merkel’s visit to Athens did not mean that the disbursement of Greece’s next bailout tranche was a given.

“Greece must fulfill its obligations for the next tranche to be paid,” said Schaeuble.