Posted on: March 1st, 2012 by AlYunaniya Staff No Comments

“Greece can make it” 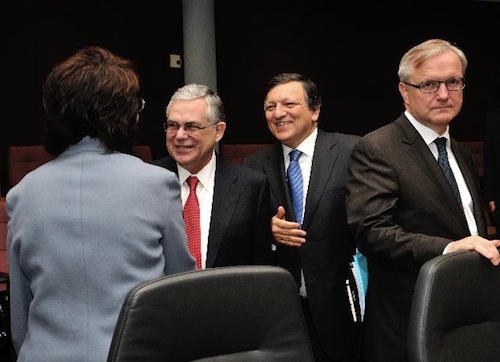 Referring to the aim of the meeting he said they wanted “to see how we can work more effectively together to enable Greece to make the most of its cohesion funding at this critical time” and also to see how we can with this reinforced monitoring and reinforced technical assistance do more to create hope for Greece. “We want to seize this moment to help get the Greek economy moving again,” Barroso stressed.

Barroso said that there are over EUR 20 billion in structural funding available to Greece for the 2007-2013 period. “We have already released more than EUR 8 billion in payments but there is scope for doing much more before 2013. And we are already giving the priority to the payments to Greece. This means also that we need to get essential growth-enhancing projects off the ground. We have identified a number of these, which could give a particular boost to investment and employment,” he said.

Eurogroup chief Jean-Claude Juncker told the Economic and Monetary Affairs Committee yesterday, a European Commissioner should be nominated to help return Greece to growth, according to an official announcement. He also observed that there was scope for cuts in the country’s military spending.

Speaking at one of his regular meetings with the committee, Juncker fielded MEPs’ concerns about the need for growth to emerge from the fiscal crisis, the next steps in solving Greece’s problems and boosting the firepower of the bailout funds. Juncker said he had hoped this would have been the week when a decision was taken to boost the European Stability Mechanism’s capital, but the idea “needed to mature further in some countries”.

On Greece, he said the Eurogroup would be keenly awaiting the participation rate of private Greek bondholders, which “would need to reach 66% for the collective action clauses to be activated”. He also stressed that the Greek government needed to act on the commitments it had given to ensure that the second bailout programme could become effective, and at the same time insisted that “it was time to stop humiliating Greece“.