Posted on: November 22nd, 2012 by AlYunaniya Staff No Comments

Greece dismayed as Eurozone fails to reach deal; to meet again on Monday 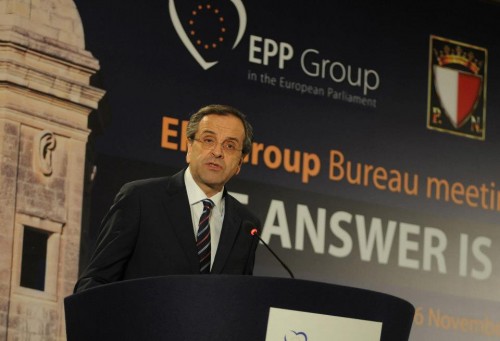 Greece reacted with disappointment yesterday to a failure by European finance ministers to agree to release up to 44 billion euros of rescue loans it vitally needs, with the prime minister warning that the stakes are higher than his debt-ridden country’s future.

Prime Minister Antonis Samaras said: “It’s not only the future of our country, but the stability of the entire Eurozone [that is at stake].”

Samaras said the lack of a debt deal between the country’s lenders over technical reasons did not justify holding up aid to Athens. “Greece did what it had committed it would do. Our partners, together with the IMF, also have to do what they have taken on to do,” he said in a statement. “Any technical difficulties in finding a technical solution

After 12 hours of debate into the early hours of yesterday, finance ministers from the 17 European Union countries together with the International Monetary Fund (IMF) and European Central Bank, again failed to reach a deal on Greece’s financing.

A significant difference has emerged between the European Union and the International Monetary Fund over how fast Greece needs to reduce its debt burden.

According to a statement by the Christian-Democrat MP Michael Fuchs, who attended the morning briefing of the parliamentary CDU / CSU group, German Finance minister Wolfgang Schäuble considers the risk of IMF’s withdrawal from the Greek rescue programme as quite real. Fuchs said that Schäuble gave the impression that the IMF may withdraw from the Greek program if there is no solution in the issue of the sustainability of the Greek debt, which, as the German finance minister said, must be avoided.

Menawhile, plans to give Greece extra time to meet deficit-cutting targets would open up a financing gap of around EUR 15 billion through 2014 and EUR 17.6 billion in the two following years, troika said in a report, according to Bloomberg.

The report gave a mixed assessment of Greece’s progress from debt to recovery, saluting Prime Minister Antonis Samaras’ coalition for “a significant catching-up” while saying that “risks to the programme remain very large.”

The 115-page draft didn’t include proposals for plugging the financing hole and two critical sections – on Greece’s debt sustainability and recommendations for next steps in the three- year effort to turn the country around – were left blank.

The report assumed that Greece would succeed in getting two additional years, until 2016, to meet fiscal targets. Estimates of the financing gap were in brackets, indicating that they could change before European governments complete work on the Greek rescue package.