Greek FinMin: “we expect the approval of the tranche in Monday’s Eurogroup” 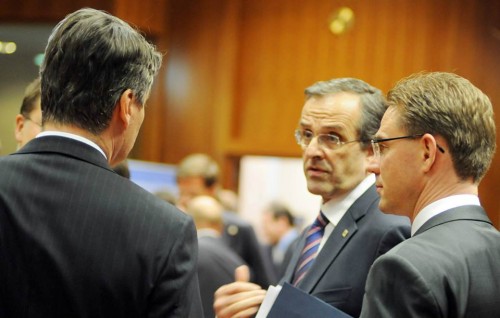 Government has expressed its optimism that it would reach an agreement with the troika by today, or sometime during the weekend, paving the way for a Eurogroup meeting on Monday to approve the disbursement of a EUR 8.1-billion tranche to Greece. Finance Ministry sources told journalists “we expect the approval of the tranche in Monday’s Eurogroup”.

According to protothema.gr, it seems there is progress in all aspects of negotiation with the troika, while the reference to a “political agreement” by FInMin Yannis Stournaras means that despite the progress made and the distance traveled by the two sides the full agreement is still pending. However, as a government member said, “Troika will show flexibility to not ruin the deal.”

“We are going towards a political agreement on Monday,” Stournaras said.

The difference on the issue of redundancies and the mobility programme cannot be covered since according to the previous agreement the Greek government should have proceeded to 2,000 layoffs by the end of June as well as speeding up the mobility programme in the public sector. Troika is not convinced for the collection of property tax either despite the arguments of the Greek side.

Government said that delays to the transfer issue of civil servants is due to the previous minister, who resigned and that they will now move the programme faster.

Discussions will continue until Sunday, although the main points of the agreement should be found until the end of the day today [Friday], in order for the Commission to be prepared for the recommendation to the Council of Finance Ministers.

Kyriakos Mitsotakis, Administrative Reform Minister, speaking to reporters, said “we will be ready on Monday”, adding it was necessary to have a deal on the issue of the public sector. “Let me tell you categorically that there is no issue of raising the number of dismissals, beyond the 15,000 agreed by the government,” Mitsotakis added.