Posted on: January 31st, 2013 by Tina Michalitsis No Comments 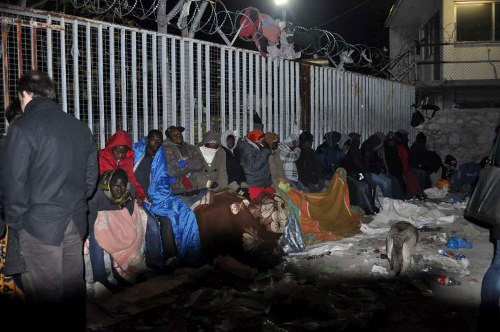 A group of United Nations independent experts today stressed that Greece must improve the conditions of detention for migrants and effectively implement recent legislation to enhance screening procedures for asylum-seekers.

“In most detention facilities visited by the Working Group, the conditions fall far below international human rights standards, including in terms of severe overcrowding,” stressed one of the members of the Working Group on Arbitrary Detention, Vladimir Tochilovsky.

The group, which just finished an 11-day visit to the Mediterranean country, found pre-trial and convicted detainees in the same cell, as well as irregular migrants mixed in with criminal detainees in violation of national and international standards.

“Detainees are being held for months in police holding cells and border guard stations, although these facilities were designed for a maximum stay of 24 hours,” Tochilovsky said. “This situation also affects the rights of pre-trial detainees to properly prepare their judicial defence as there are no adequate facilities for the communication of the detainees with their defence lawyers.”

During the visit, the working group interviewed detainees and found that few of them were aware of their right to legal assistance and, in numerous instances, did not enjoy this right without payment.

They also stressed that the lack of judicial review as well as the excessive length of detention can be considered an arbitrary deprivation of their liberty. “The imprisonment of a migrant or an asylum-seeker for up to 18 months, in conditions that are sometimes found to be even worse than in the regular prisons, could be considered as a punishment imposed on a person who has not committed any crime,” said Tochilovsky.

The group met with Greek authorities from the executive, legislative and judicial branches as well as with legal representatives, civil society organizations and international organizations. It also visited various detention centres in Athens, the Aegean island of Samos, Alexandroupolis, Orestiada, Komotini, Soufli and Thessaloniki.

On a positive note, Tochilovsky welcomed the adoption of legislative reforms on this issue and commended the Government for the creation of the new Asylum Service Department to establish the First Reception Service responsible for screening procedures. The new department will be independent from the police and under the control of civilian and specialized personnel.

Independent experts, or special rapporteurs, are appointed by the UN Human Rights Council to examine and report back on a country situation or a specific human rights theme. The positions are honorary and the experts are not UN staff, nor are they paid for their work.