Posted on: March 7th, 2013 by Julie jalloul No Comments 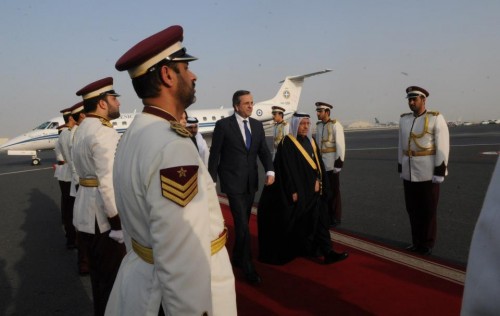 A meeting held at the development ministry in Athens on Wednesday of the Joint Greece-Qatar Cooperation Committee, focused on setting up the Greece-Qatar Investment Fund and potential investments by partnerships of Greek and Qatari businesses.

The meeting which was held under the chairmanship of Deputy Development Minister Notis Mitarakis and the chief executive of Qatar Holdings, Ahmad Al-Sayed, included at least seven businesses in the tourism, energy and foods sectors, based on the request made by the Qatari side.

Discussion focused on the creation of a fund to support small and medium-sized investment activity, dealing mainly with technical details regarding its structure, operation and method of financing so that it will not clash with Community law.

The agreement was reached during a visit by Greek Prime Minister Antonis Samaras, who was accompanied by his development and defence ministers and a team of Greek business leaders.

Yet while Samaras’s meeting with the government in Doha had concluded that the subsidy fund would start with 2 billion euros, half from each side, it appears that due to a lack of funds and European legislation that could raise obstacles, Greece will not necessarily have to contribute any money to an investment, daily Kathimerini reports.

Qatar is apparently also examining its possible participation in another institution that the Greek government intends to create, the Hellenic Investment Fund.

A Development ministry source told Kathimerini that the meeting discussed three ways of financing the joint fund, through which Qatar plans to subsidize Greek enterprises. These are joint funding by the Greek and Qatari states, funding only by Qatar, and funding with capital originating from Qatar as well as other countries or investment banks in other countries such as France and Germany.

Last month Qatar returned as a candidate in the international competition process to develop Hellinikon, the Greek airport site on the city’s southern coast.

Meanwhile a report in Tuesday’s Financial Times stated that the Qatar Investment Authority (QIA), is not only interested in the development of the Greek capital’s former airport, but also in the operation of the new Athens International Airport, seeing it as a potential hub for Qatar Airways.