SYRIZA calls into investigation of ‘inhumane’ conditions at migrant camp 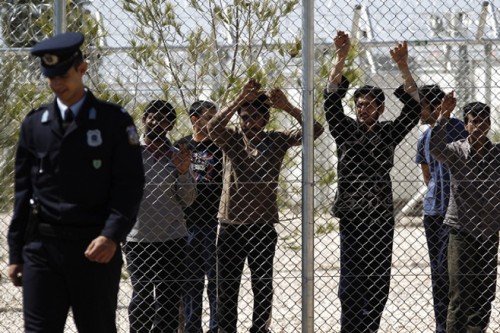 In an announcement issued on Sunday, main opposition party ‘Coalition of the Radical Left’ (SYRIZA) demanded an inquiry into allegations of ‘ inhumane and humilitating’ conditions at the Amygdaleza migrant camp where a riot took place on Saturday.

“Greek and foreign organisations for human rights but also, more recently, the mayor of Acharnes have reported that conditions at the Amygdaleza concentration camp are inhuman and humiliating, a fact made worse by the high temperatures,” the party said.

SYRIZA called for the immediate launch of an investigation to determine whether migrants were beaten when police units entered the facility to quell the riot .

The party also called for the immediate closure of camps and their replacement with hospitality centres for migrants and refugees needing international protection.

Meanwhile, the Greek police has denied that conditions for detained migrants at the Amygdaleza  center in Athens were unsuitable after a riot broke out on Saturday and 10 immigrants escaped from the facility, according to Kathimerini.

“We take all the necessary measures so holding conditions are respectable and that there is no chance of escape,” police spokesman Christos Parthenis told Mega TV.

Riot police were dispatched on Saturday to put down a riot at Greece’s main migrant detention camp where detainees hurled stones at officers and set fire to their living quarters, authorities said, AFP writes.

Violent riots broke out at the centre late on Saturday night and continued until the early hours of Sunday morning.

Television footage showed fires blazing at the Amygdaleza detention camp outside Athens, where some 1,200 mainly Asian migrants are kept under police guard.

Amygdaleza is one of several detention camps set up since last year to assist in the repatriation of thousands of undocumented migrants.

The police spokesman said rioting began when the detainees were told that their maximum stay in the camp would be extended to 18 months from a year previously.

According to AMNA, during a head count on Sunday, ten of the foreign nationals being held at the facility were found to be missing.