Posted on: November 28th, 2012 by AlYunaniya Staff No Comments 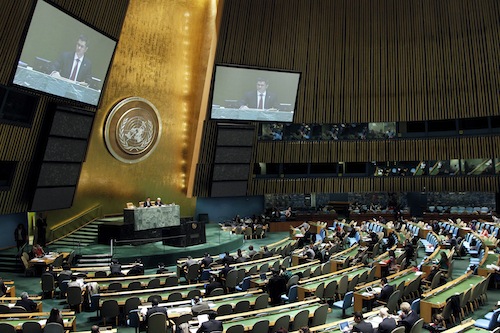 Greece has decided to vote in favor of the Resolution on upgrading Palestine’s status to that of UN non-member state at tomorrow’s session of the United Nations General Assembly.

In an announcement, Greek Foreign Ministry said: “Our decision is consistent with our country’s longstanding position of principle on the resolution of the Middle East problem based on two states: an independent and viable Palestinian state coexisting in peace and security with the state of Israel.

With the historic developments in the wider Middle East, Greece believes that the time has come for the Israelis and Palestinians to live – as is their inviolable right – in security in their states. The two-state solution, which is described in successive UN General Assembly Resolutions, and which is reaffirmed in the draft Resolution before us, is the only solution that ensures the long-term interests of the two peoples and peace and stability in the region.

As we have often underscored, the solution to the problem cannot but be the result of negotiations between the two parties, which are responsible for resolving – realistically and in accordance with international law – all the issues of the final status. Thus, we see as extremely positive the provision of the draft resolution for the immediate and unconditional return of the two parties to the negotiation table.

We express the hope that the two parties will take advantage of this new opportunity for peacemaking and avoid any action that might wreck the climate and undermine the direct negotiations.”