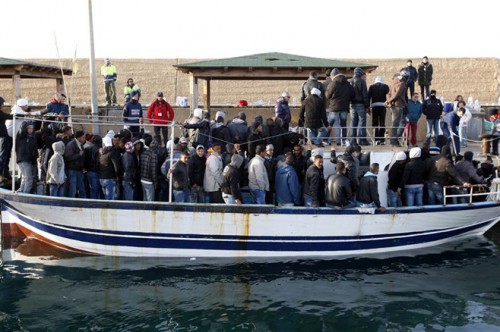 Refugees and migrants trying to reach the EU via Greece from conflict-torn countries like Syria and Afghanistan are being unlawfully returned to Turkey by Greek coast and border guards, Amnesty International reveals in a new report.

The 40-page report Frontier Europe: Human Rights Abuses on Greece’s border with Turkey examines the Greek authorities’ dangerous use of ‘push backs’- when they turn groups of migrants back across the border, denying them the right to have their individual cases heard or to challenge their expulsion.

The report also highlights the dangers refugees and migrants face trying to cross from Turkey to the Greek islands, and explores the appalling detention conditions those who do make it are often held in.

Since March, Amnesty International has spoken to nearly 30 people in Greece and Turkey who, in at least 39 separate instances, have been stopped trying to cross the Aegean or the northern land border between the two countries along the river Evros.

Almost all of them described how they had experienced or witnessed violence and/or other ill-treatment by the Greek authorities. Many said guards had taken their belongings, including money, family photos and heirlooms, and in some cases thrown them into the sea.

“What’s happening along the Greek border does not just shame Greece. It shames the European Union as a whole,” said Jezerca Tigani, Amnesty International’s Deputy Director for Europe and Central Asia.

“The number of push back stories we collected is extremely alarming. It suggests that the Greek authorities are employing this practice on a regular basis, despite the fact that it is unlawful. And it is also extremely dangerous – to the point where it puts people’s lives seriously at risk.”

Testimonies collected by Amnesty point to the blatant disregard for human life shown by the Greek coastguard during these operations carried out in the Aegean Sea. Thirteen of the 14 interviewees who described being returned to Turkey said how their inflatable boats were rammed, knifed, or nearly capsized while they were being towed or circled by a Greek coastguard boat. They said their boats’ engines were disabled and their oars removed, then they were just left in the middle of the sea. Life-endangering practices were also reported by people caught after crossing the river Evros.

The route across the Aegean has become more popular since last year when authorities built a 10.5 kilometre fence and deployed nearly 2,000 new border guards along the border at the river Evros. But it is a dangerous one. As well as the threat of push backs, since August last year more than 100 people – including women and children and mostly Syrians and Afghans – have drowned trying to reach Greece.

“As the weather gets better and conflicts in Syria, Afghanistan, Iraq and Somalia continue, we expect more people to attempt the journey and we are likely to see more tragedies like these,” said Jezerca Tigani.

Those who do make it to Greece are routinely detained in dark, dirty cells for long periods. Many of the people Amnesty spoke to had spent nearly nine months behind bars. Health problems are rife.

“The conditions refugees and migrants are being held in are often appalling. In fact, when we visited people in those cells it was difficult to remember we were actually in the EU. Many of them are fleeing conflict, poverty and hunger but too often they are being held in dark, dirty, damp cells, with limited access to fresh air and not enough food,” said Jezerca Tigani.

“Some detainees told us they had to call the police when they needed to use the toilet as there were no toilets in their cells. They said their calls were often not answered for hours so they had to urinate in bottles. Others said their bedding had not been washed for months, and that they had limited access to soap, shampoo or sanitary towels,” she added.

Amnesty International is calling on the Greek authorities to stop push backs immediately and investigate allegations of collective expulsions and ill-treatment, and to prosecute those involved. It wants all those intercepted trying to cross borders to have their cases for international protection heard fairly. It wants the Greek authorities to end the indiscriminate and prolonged detention of irregular migrants and asylum-seekers; and use alternatives to detention.

The EU has a role to play too. It must support the Greek authorities by helping to improve reception services instead of sealing off borders. The EU should also explore new ways of sharing responsibility for refugees and migrants.

“It is obviously Greece’s prerogative to control its borders, but not at the expense of the human rights of those trying to reach safety, or looking for a better life, in Europe. These are difficult times in Greece, and for millions across Europe, but there is no excuse for how refugees and migrants are being treated,” said Jezerca Tigani.

“Other EU Member States appear only too happy for Greece to act as their gatekeeper. But the policies and practices along the Greek border expose the bitter irony of European countries pressing for peace abroad while denying asylum to and putting at risk the lives of those seeking refuge in Europe. The EU must act now to stop these human rights violations at its borders,” she said.