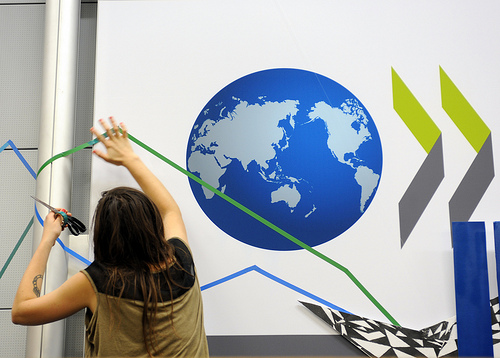 Greece’s economy will keep contracting until mid-2013 as austerity fatigue may hamper the pace of reforms, the OECD projected in its May outlook on Tuesday.

The Greek economy contracted sharply in 2011 due to strong fiscal retrenchment, severe economic dislocation and weak exports. Unemployment has risen rapidly, especially among the young. Output is set to decline further until the second half of 2013 when the pace of fiscal consolidation is expected to ease somewhat, wide-ranging structural reforms to boost competitiveness and promote investment start to bear fruit, and international demand strengthens. These projections assume that the EU/IMF programme of fiscal consolidation and structural reform is fully implemented.

The economic adjustment programme approved in March 2012 gives Greece time to proceed with the fundamental reforms it needs. It should be implemented rigorously to restore growth and stabilise the public finances.

According to OECD Outlook, the global economy is, once again, trying to return to growth, helped by a modest pick-up of trade and an improvement in confidence. It is doing so, however, at different speeds, with the United States and Japan growing at a stronger pace than the euro area and large emerging economies enjoying a moderate cyclical upswing. Different dynamics are also developing in labour markets in the United States, where unemployment is slowly decreasing, and in the euro area, where instead it keeps rising.

OECD noted: “Almost five years ago, in the summer of 2007, turbulence in the US subprime market sparked off the most dramatic financial and economic crisis in several decades. After five years we cannot yet say that the crisis is behind us. More than once signs of recovery have disappointed. Policy mistakes have been made, sometimes reflecting inaccurate reading of events, at other times reflecting policy and political failures. Is it different this time? As long as confidence is not rebuilt on a solid basis with the right policy choices, downside risks will prevail. This is important everywhere but particularly so in the euro area, where crisis management goes hand in hand with the building of the institutions needed for a monetary union to work properly.”