Posted on: April 1st, 2013 by Dimitris Ioannou No Comments 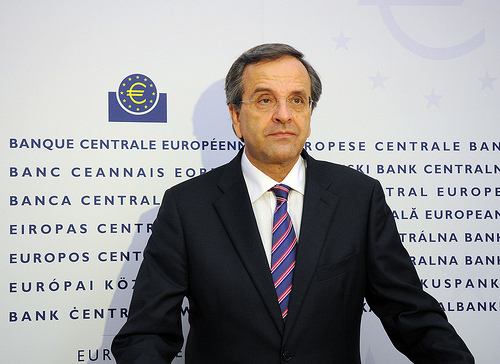 Coalition partners decided to meet on Wednesday to discuss a series of pressing issues, in an effort to present a united front to troika representatives who are expected in Athens on Thursday for a new round of inspections.

Prime Minister Antonis Samaras, PASOK leader Evangelos Venizelos and DIMAR leader Fotis Kouvelis will have to clear things as regards a much-delayed downsizing of the civil service, on lagging tax collection and on the planned merger of National Bank and Eurobank, Kathimerini informs. The talks, which broke off last month amid a disagreement on the civil service overhaul, are to determine whether or not Greece receives the next tranche of rescue funding from its international creditors, worth EUR 2.8 billion.

According to AMNA, the prime minister’s intention is that all the outstanding matters should be dealt with and that solutions will have been found to the two thorny issues of the mobility programme in the public sector and the collection of the real estate surtax.

Kathimerini identifies three problems that need to be addressed: first, the objections from the two coalition partners as regards the government’s stance towards the troika as well as disagreement as regards the property tax to continue to be levied via electricity bills. Second, the worsening climate in the eurozone following the tense negotiations on the Cyprus bailout which has fuelled speculation about a tax on bank deposits being imposed in other member states if deemed necessary. Third, an estimated fiscal shortfall of EUR 2.7 billion; it is considered unlikely that troika officials will seek new austerity measures to cover this gap, as such a move would doubtlessly fuel social tensions, but they are unlikely to show much flexibility on the need for enforcing measures already pledged to creditors such as the downsizing of the civil service.

Samaras has reportedly told his ministers that all issues with the troika need to be resolved by this week and in time for the next scheduled Eurogroup meeting in Dublin on April 12.

Specifically, Samaras and his ministers reportedly discussed a EUR-2-billion hole in the budget (though Stournaras told reporters on Friday that there is no hole) and a steep drop in income tax revenue this year. They also discussed alternative ways to levy this year’s property tax.

According to protothema.gr, there are two estimations as regards the next round of talks with the troika. According to the optimistic one, troika will be conciliatory so as not to exacerbate the political climate after the lack of solution to the Cyprus problem and to avoid causing further social unrest. The most optimistic say the next visit could even end within 1 to 2 days. The pessimistic estimation predicts that troika will be strict, wanting to show that no easing in the politics of austerity will be tolerated. Moreover, Germany will want to confirm with Greece the message it sent to all direction in Cyprus’ case.