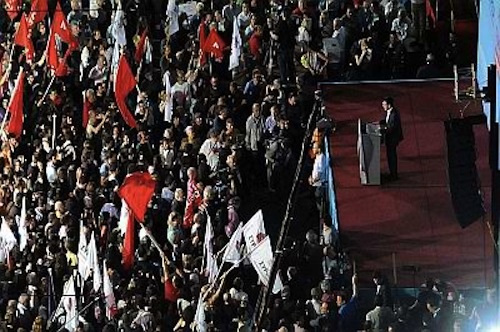 The vast majority of Greeks strongly wish the country to stay in the Eurozone. At the same time, a significant majority wants out of the MoU, namely to abandon what Europeans consider the country’s obligations towards its lenders and bailout coordinators.

The illusion that Greece can go forward through this oxymoron constitutes the SYRIZA vote.

Traditionally, the European left rhetoric in Greece has been more left than about Europe. Pure leftish arguments that most Greeks loathe in terms of their consequences on the real economy and people’s individualism have been the main reason Tsipras’ party remained for nearly a decade close to the 3% Parliament threshold, marking in a few votes the difference between political obscurity and House representation.

Dissatisfied, indignant Greek voters were up for grabs throughout the last two years, coming from different political parties, sharing the same anti-MoU feeling. SYRIZA leader managed to utilise a clever strategy, adopting centre-left arguments that sounded positive even to ND voters who were orphaned when Samaras vehemently shifted towards the right. On the 6th of May 37% of PASOK and 13% of ND voters subscribed to Tsipras’ rhetoric, once again proving that in Greece, voters do not pay attention to programmatic documents and political intentions. Admittedly so, no one ever imagined that SYRIZA could turn into a government partner.

A series of factors led to the destruction of the centre-right. The damage for ND began when party leadership decided to vote against the first MoU in 2010, alienating the centrist vote, instead of staying in the pragmatist side of politics, pushing for changes and innovative, reformist alternatives, especially when George Papandreou adopted the easy way out, namely milking salary earners and pensioners.

Instead of staying in the game, dealing with hardcore politics, ND leadership ordered party people to hit the streets, miserably antagonizing leftist unionists who used to rally for a living. The lack of mainstream political agenda left the centre-right with no alternative than to start pushing for snap elections through nihilism and imitations of leftish activism tactics. A few years later, when PASOK and George Papandreou succumbed to the huge social and political pressure and Lucas Papademos took over, ND had to give in and sign the MoU II, to avoid taking the blame for the country’s collapse. Then, after the expulsion of a group of MPs who remained hooked to the populist view, to massage their constituencies, the party lost the popular vote that followed Panos Kammenos in a daring, albeit fruitless quest towards the patriotic right. On May 6, ND reached the bottom of the centre-right dynamics, in a down-curve that began from 45.3% in 2004, to 41.8% in 2007, down to 33.5% in 2009 to a humiliating 18.8% in 2012.

PASOK, on the other hand is trying to survive the 13.2% result (from almost 44% in 2009), putting together all sorts of party casts, while pushing older executives to step down with decency. The centre-left party has suffered the Papandreou administration that failed to tame PASOK’s populist soul. However, what was not clearly foreseen back then was that after its victory against George, the populist mass was determined to seek for the next best roof in the socialist neighborhood, namely Alexis Tsipras.

This is not surprising, since PASOK has always been a formation of different people of unclear ideological background, united by their common thirst for power and the benefits that stemmed out of it.

In the prosperity years, generous budgets of all sorts kept everyone focused on the primary task, i.e. to maintain control of the state apparatus and burse. As soon as the money run out, the horde scattered, following separate roots. These days, SYRIZA leadership is the next best option that resembles the old, populist PASOK; even some of the old Andreas Papandreou’s charisma, some say. At the same time, SYRIZA is the only harbor for those who continue to see the state as a milking cow.

Considering also that, despite the drama, Greece is still at the beginning of a long reformist journey, statists opposing this path like to think they have a chance to stop it. They are assisted by a significant number of middle and lower class households, which are hit by the austerity measures and hope to minimize their losses, by scraping the MoU recipe.

Most of the aforementioned groups see their degrading -and to a great extent corrupted- fields of work, or protected professions or black economy transactions gravely threatened by the reform process.

On June 17, the same groups are preparing to vote against their future. In the minds of Europeans, this is a mindless vote. But for those who understand the Greek psyche, it is a last attempt to rescue an old, degraded and widely spread micro world, seconds before its violent descent down the steepest cliff of the country’s modern economic history.