Posted on: June 7th, 2012 by Dr. Demetris Kamaras No Comments 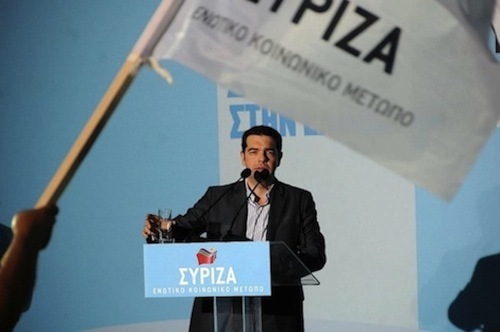 The origins of understanding SYRIZA, the probable winner of June 17 elections, lie in the end of the 1970s, in the early steps of the then Panhellenic Socialist Party and its buoyant leader Andreas Papandreou.

In a book called ‘PASOK’ [Spourdalakis (ed.), 1998], it is argued that the political / electoral success of the socialist party in the 1980s relied on the fact that it managed to combine a left rhetoric, expressed through populist punch lines that sounded radical (against NATO and the then European Community), with the ability to come up with a governance competence that lasted from 1981 to 2004 (minus the 1989-1993 Mitsotakis administration interval).

Andreas Papandreou managed to combine demagogy with political realism. His legendary statement about the then European Community and the North Atlantic Treaty Organization, loosely translated into “EC and NATO, both sides of the same coin” has been a major instrument of demagogy. Later on, PASOK government dismissed the anti-EC arguments that used to mobilise its supporters, started arguing for a Norway-type, special relation with the common market and finally ended up embracing the benefits of EU membership and the subsequent funds coming from the Support Frameworks.

In the last month or so, SYRIZA adopted a similar approach; it tackled May 6 election debate in a populist way, mounting the anti-austerity wave, attracting people from different political wings. Then it transformed its strong anti-EMU rhetoric into a crusade to change the EU, moving beyond the necessities of Greece, thus turning the Greek MoU debate into a debate for the future of Europe; essentially Tsipras avoids appearing specific as regards the core of Greece’s obligations, i.e. the loan agreement and the so-called MoU II. He curses Memorandum policies and promotes a “different route”, just like Andreas Papandreou used to blame the Right and promise the “third road to Socialism”.

Alexis Tsipras’ moves in the last 6 months have been quit effective. He is supported by some brainy political advisors and strategists as well as -rumour has it- Andreas Papandreou’s personal strategist Kostas Laliotis, who, while he issued an announcement to dismiss a right wing newspaper story that referred to his involvement, he appeared very generous in the way he complimented Tsipras’ close associates. It was almost as the leak was planted just to legitimize a meaningful announcement by PASOK’s enfant gâté.

Two weeks before the elections, Alexis Tsipras is turning heavier in his appearance, lowers the voice and stresses his words as an experienced leader, whose crowd keeps increasing. According to all indications, he will spend the remaining pre-election days investing on a leadership profile that will come in handy if the future of the country will be handed to him.

The climax moment could be the television debate with ND leader Antonis Samaras, that -in my opinion- could benefit the young politician, killing all hopes for the centre-right leader. But is seemed that New Democracy’s second thoughts have been wiser than the initial careless call that invited young Alexis to a beauty contest with his senior ND counterpart.