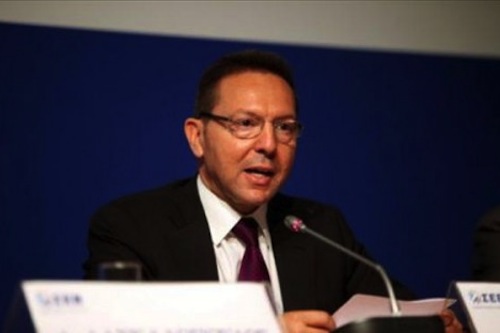 “The euro zone must deal with its main problems,” Stournaras noted. “A banking union… an economic policy which combines fiscal consolidation and growth, not all countries can impose austerity … and the most important: a common debt market, but this probably at the end.”

Stournaras added that Greece, which is in its sixth year of recession, needs a primary budget surplus and growth before it returns to the bond markets.

In an interview with Mega TV, Stournaras said: “we received the support we needed from the U.S.” He noted that the visit of Antonis Samaras in the United States was very important. “We agree with the U.S. in the overall attitude to the economic policy. By itself austerity does not bring results. The Eurozone must address its main problems with a banking union, an economic policy that combines development and a unified debt market,” the minister said.

President Obama would not have taken the risk of a positive statement if the Greek economy were not doing well, Stournaras added.

“I see no major conflicts between USA and Germany for the Greek debt, but a constructive dialogue. Greece must achieve a primary surplus at the end of 2013.”

When asked if the recession will end, the FinMin said: “data so far suggest that by the end of 2013 Greece will go into primary surplus. The recession in 2013 will be below 5%.” “My previous statement about growth in 2014 still stands,” he said.