Posted on: April 16th, 2013 by Dimitris Ioannou No Comments 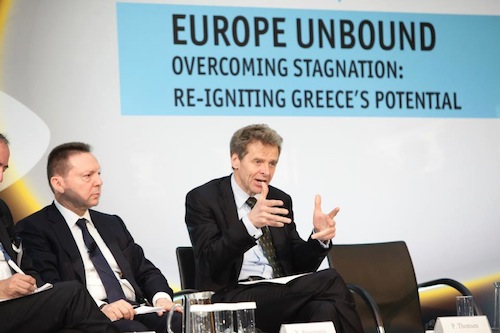 “We have reached an agreement with troika. The disbursement of the next tranche is expected without problems,” Finance minister Yannis Stournaras said addressing the Economist conference.

“We have implemented two-thirds of the fiscal adjustment programme and three quarters of the adjustment of economic competitiveness. It takes patience and sobriety. We disappointed the doomsday prophets.”

“The big goal is to achieve a primary surplus in 2013 to demand the implementation of the clause in the Eurogroup decision which provides for a drastic reduction of public debt. Those who promise to get us out of the memorandum but we will keep us in the euro are lying,” Stournaras added.

IMF’s Paul Thomsen confirmed the government-troika agreement describing the event as “good news” at the beginning of his speech at the conference. “This will open up paths for further steps. Greece has come a long way… Greece is achieving its fiscal targets and will soon succeed in having a primary surplus.”

“Greece’s fiscal adjustment programme is on track… achieving primary surpluses is a priority… Greece could attain its targets without new measures affecting salaries and pensions, provided the targets in relation to taxes were met.”

In a statement on the conclusion of the review mission to Greece, troika said: “Staff teams from the European Commission (EC), European Central Bank (ECB), and International Monetary Fund (IMF) have concluded their review mission to Greece. The mission has reached staff-level agreement with the authorities on the economic and financial policies needed to ensure the programme remains on track to achieve its objectives.

The mission and the authorities agreed that the economic outlook is largely unchanged from the previous review, with continued prospects for a gradual return to growth in 2014, supported by inflation well below the euro area average and improved wage flexibility, which are helping to restore the competitiveness of the Greek economy.

Fiscal performance is on track to meet the program targets, and the government is committed to fully implement all agreed fiscal measures for 2013-14 that are not yet in place, including adoption of legislation to extend collection of the real estate tax through 2013 via the Public Power Company. It remains important to respond promptly to any slippages that may emerge. The authorities have made important progress on measures to improve tax and debt collection, through reforms of the revenue administration to provide it with significantly more autonomy, powers and resources, and adoption of more effective and enforceable installment schemes. This was a major focus of the mission, given the importance of improving tax collection and reducing the scope for evasion and corruption in order to ensure a more balanced and fair distribution of adjustment and to support the achievement of fiscal targets and minimize the need for further adjustment measures.

Actions to fully recapitalize the banking sector as envisioned under the program are nearing completion, and the authorities have undertaken to develop a comprehensive strategy for the banking sector following recapitalization. Most of the EUR 50 billion available under the program for recapitalization has already been disbursed to Greece and injected into each of the four core banks by the HFSF as advances to cover their capital needs. The mission’s assessment is that this will provide adequate capital, even under a significantly adverse scenario. These capital buffers will thus ensure the safety and soundness of the banking system and of its deposits.

Other main areas covered during the review included (i) administrative reform to improve the quality of the public service and strengthen accountability by streamlining its structures, removing positions, and reallocating staff, and through dismissals that are targeted at disciplinary cases and cases of demonstrated incapacity, absenteeism, and poor performance, or that result from closure or mergers of government entities not subject to the mobility scheme; (ii) liberalization of product and service markets including transport and retail trade; (iii) privatization of state-owned assets; and (iv) electricity sector reforms to ensure financial sustainability and avoid the build-up of debt. The mission also discussed with the authorities progress in strengthening the social safety net, including through targeted employment and training programs supported by the EU, pilot programs to extend unemployment benefits and provide minimum income support, a program to provide access to primary health care for the uninsured, and a scheme to reduce the financial burden on indebted low-income households which have been severely affected by the crisis.

The recent steps taken by the authorities suggest that the March milestones are likely to be achieved in the near future and hence the disbursement of the related EUR 2.8bn from the EFSF tranche remaining from the previous Review could be agreed soon by the Euro area Member States.

The mission’s view is that debt sustainability remains on track. Continued full program implementation, together with commitments by Euro Area Member States to consider future initiatives and assistance, if necessary, for achieving a further and credible reduction of the Greek debt-to-GDP ratio when Greece reaches an annual primary surplus, in order to keep debt to the programmed path, should help to ensure the long-term sustainability of Greece’s public debt.

The Eurogroup and the IMF’s Executive Board are expected to consider approval of the Review in May.”